March 25, 2017
For MMGM, I am recommending The Door in the Wall by Marguerite de Angeli. 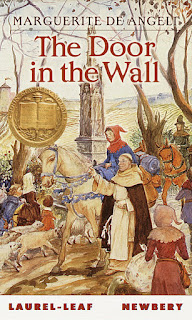 Here's the publisher's description (copied from the back of the book):

Robin has grown up the son of a nobleman. He knows he must serve the king by becoming a knight. But Robin's destiny is changed suddenly when he falls ill and loses the use of his legs.
A monk named Brother Luke rescues Robin and takes him to the hospice of St. Mark's. There Robin learns woodcarving and—much harder—strength and patience. When danger threatens the great castle of Lindsay, Robin discovers there are more ways to serve a king than riding into battle. As Brother Luke says, "Thou hast only to follow the wall long enough and there will be a door in it."

Originally published in 1949, this book is set even earlier (the 1300s). Unlike some historical fiction, however, this book is short (about 120 pages) and to the point. The majority of the book revolves around Robin as he tries to regain function in his legs and also learns skills such as woodwork and writing, with the monk who found him alone and with no ability to move. The story has an especially current message, which is that even those who are disabled are still beneficial to the world and to others. This is reinforced by the end of the story, in which Robin helps save a castle by discovering useful information. Unlike many Newbery books, this one is relaxing and calm, with no particularly sad moments. This is one of my favorite historical fiction novels of all time!
✨✨ Labels: Middle Grade My Family Read-Alouds Royalty and Majesty