August 07, 2017
Update (June 26, 2021): When I wrote this review, I was unfortunately unaware of some of the racist aspects of To Kill a Mockingbird. As I have learned over the years, I can no longer recommend this book, but I have decided to leave the post up as a teaching opportunity. I highly recommend reading this article by Saoirse Herlihy about the problematic elements of To Kill a Mockingbird (special thanks to Elisabeth Ellington at The Dirigible Plum for recommending that article). I apologize for the ignorance in this post, and I no longer stand by this post's content. Thank you for understanding.
Update (4/2/2022): I typically participate in blogging groups that review kids’ books, but sometimes, I do end up reading adult books like this one. In the past, I have typically labeled those books as MG or YA when I review them, primarily because I still want my typically blogging audiences to see them! However, this has become confusing, so I have decided to re-label these books as adult books, while leaving the reviews in their original format. Thank you for your consideration!
If you were reading this blog several months ago, you might remember that I did a post in a new style I called Classic Critique, where I list the pros and cons of a famous book. Today, I am critiquing To Kill a Mockingbird by Harper Lee (which I wholeheartedly recommend). First, however, I would like to tell you that today is the one-year anniversary of Completely Full Bookshelf! I first posted on this blog on August 7, 2016, when I recommended When You Reach Me. I would like to thank all of the authors of the books that I loved so much, and I would also like to thank all of my readers, old and new, for giving me a supportive audience to recommend books to. Now, to the review! 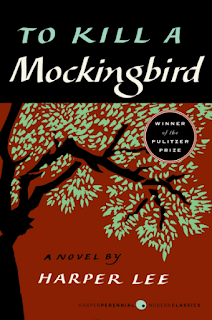 Verdict:
To Kill a Mockingbird isn't perfect, but no book is. It is still an incredible story that any reader will remember for the course of their life and come out of feeling changed for the better. Although some classics are only famous for being good in their time, To Kill a Mockingbird is still better than many books published today, and it probably will be forever.
✨✨ Labels: Adult Books Classic Critique