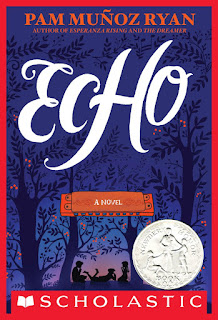 Lost and alone in the forbidden Black Forest, Otto meets three mysterious sisters and suddenly finds himself entwined in a puzzling quest involving a prophecy, a promise, and a harmonica.

Decades later, Friedrich in Germany, Mike in Pennsylvania, and Ivy in California each become interwoven when the very same harmonica lands in their lives, binding them by an invisible thread of destiny. All the children face daunting challenges: rescuing a father, protecting a brother, holding a family together. How their suspenseful solo stories converge in an orchestral crescendo will resound in your heart long after the last note has been struck.

Richly imagined and structurally innovative, Echo pushes the boundaries of form and shows us what is possible in how we tell stories.

This Newbery Honor Book is incredible! One of the best things about it is the vivid portrait of the time and its hardships that it paints. The book is intertwined with subjects such as the Nazis, Japanese internment camps, orphanages, and fighting in the war. Every issue that occurs in the book, from Friedrich being pressured to take part in a Nazi-required surgery to prevent him from having kids due to a large birthmark on his face, to Mike discovering that his new adoptive mother plans to give him and his brother up, to Ivy dealing with having a sibling fighting in the war while visiting the home of a family currently in a Japanese internment camp, is handled deftly and touchingly. Every character is complex, even minor ones, and readers will root for the three major ones until the end of the book, which features an uplifting ending. The book's nearly-600 pages are not filled with text and go by quickly, making Echo one of the rare books that can teach about the past, emotionally impact its readers, and move quickly and be enjoyable to read!
✨✨ Labels: Middle Grade