February 11, 2018
For MMGM, I am recommending Nevermoor: The Trials of Morrigan Crow by Jessica Townsend. 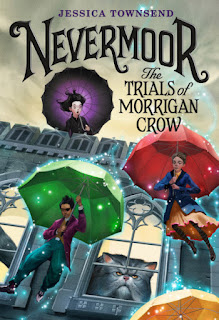 A breathtaking, enchanting new series by debut author Jessica Townsend, about a cursed girl who escapes death and finds herself in a magical world–but is then tested beyond her wildest imagination.

Morrigan Crow is cursed. Having been born on Eventide, the unluckiest day for any child to be born, she’s blamed for all local misfortunes, from hailstorms to heart attacks–and, worst of all, the curse means that Morrigan is doomed to die at midnight on her eleventh birthday.

But as Morrigan awaits her fate, a strange and remarkable man named Jupiter North appears. Chased by black-smoke hounds and shadowy hunters on horseback, he whisks her away into the safety of a secret, magical city called Nevermoor.

It’s then that Morrigan discovers Jupiter has chosen her to contend for a place in the city’s most prestigious organization: the Wundrous Society. In order to join, she must compete in four difficult and dangerous trials against hundreds of other children, each boasting an extraordinary talent that sets them apart–an extraordinary talent that Morrigan insists she does not have. To stay in the safety of Nevermoor for good, Morrigan will need to find a way to pass the tests–or she’ll have to leave the city to confront her deadly fate.

Perfect for fans of the Harry Potter series and Neil Gaiman, this fast-paced plot and imaginative world has a fresh new take on magic that will appeal to a new generation of readers.

This novel is one of my new favorites! There's so much to love that I don't know where to begin, but I'll try! The plot of the novel is well-balanced, including slow, sad portions that set the stage for the book, action-packed scenes (often chases) that are actually early in the book, calmer moments as Morrigan gets used to her new home, and a part-ominous, part-thrilling climax that ends off the novel (the first in a series). The world of the book is incredibly vivid—I read an article about how the author had been thinking about the series for about a decade (I liked the book so much that I looked it up), and it shows! There are many clever new creatures, inventions, and myths that are described in the perfect amount of detail. The novel also has many great characters. Morrigan is an excellent protagonist who has a personality clearly influenced by the events of the story. Other characters include adults who are children at heart, kids who can be serious and grouchy or fun and caring, a number of antagonists ranging from essentially harmless to incredibly destructive and terrifying, and a giant, grouchy, talking cat (see the cover)! To round the novel off, Townsend also adds in a bit of conflict that overtly parallels the real world: the government tries to get Morrigan expelled from Nevermoor for having entered the city illegally. Nevermoor: The Trials of Morrigan Crow is an excellent start to a series that has immense potential, and I know that every reader will wait for every new novel (and the upcoming movie!) with unconfined anticipation and excitement!
✨✨ Labels: Jessica Townsend Middle Grade My Family Read-Alouds