I'm back from my vacation, and this week, I have a Classic Critique for MMGM of Watership Down by Richard Adams. This famous novel tells the story of a group of rabbits that are forced to evacuate their warren and find a new home in a human-dominated world. 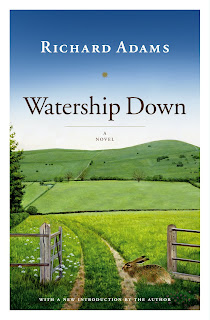 Verdict:
Some of you, if you are students, may be required to read this novel for school (like me), in which case you are in for a very flawed but ultimately pleasant read. If you are an adult who has never read it or a child who wants to read it for fun, however, the choice is more complex. The book's portrayal of its female characters could be so damaging to children's developing viewpoints that it makes it hard for me to recommend that they read it. Adults, however, might actually enjoy the novel's fast-moving plot, commentary on how humans treat animals, and display of good leadership, and they will definitely be more informed members of society for having read such a famous classic! Watership Down's positive and negative qualities paint a vivid picture of what was acceptable and enjoyed in the 1970s, and readers will finish the book with a broader understanding of how writing styles, archetypes, and cultural ideas have changed since then.
✨✨ Labels: Adult Books Classic Critique My Family Read-Alouds