June 15, 2019
For MMGM, I am recommending Nooks & Crannies by Jessica Lawson. 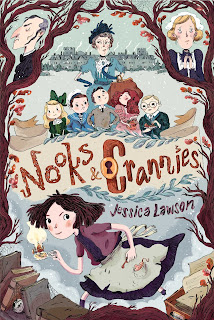 There are three important things to note about Tabitha Crum, the main character of Nooks & Crannies. One: she loves reading mystery novels, especially the Inspector Pensive series (you will see excerpts from this "series" at the beginning of each chapter). Two: she has no friends except her pet mouse/investigative companion that lives in her pocket, Pemberley. Three: her narcissistic, self-absorbed parents despise her and ensure that she knows it. Tabitha's life is quite miserable until she receives an invitation to meet the secretive, wealthy, and charitable Countess of Windermere at her home, Hollingsworth Hall. Once there, she meets five other children who were invited as well: Oliver, the kind child of a rich family; Viola, well-known for the charitable donations she has made using her family's money; Edward, whose mind is filled to the brim with random facts; Frances, who will stop at nothing to put down the other children and gain the Countess's favor; and Barnaby, the bully at Tabitha's school who may have more to him than he lets on. None of the children know why the Countess has invited them, but that soon becomes the least of their problems: there are strange noises, deaths, and an unsettling number of knives at Hollingsworth Hall, and it is up to Tabitha and the other children to figure out just what is going on before any of them go from guests...to victims.
One of the best parts of Nooks & Crannies is Tabitha herself. She has numerous interests and a realistic personality; as with any good book, you can often predict how Tabitha will react in a situation because you know her so well. Tabitha's shyness and struggle having conversations with anyone is well-depicted, as is the inferiority complex she deals with that stems from her parents' constant shaming and berating. Author Jessica Lawson uses an interesting method to characterize Pemberley, Tabitha's pet mouse; much of what we would consider characterization is simply what Tabitha imagines him to be saying or thinking, but the actions we see him take line up with Tabitha's thoughts about him, allowing even the imaginary words and thoughts to contribute to what we think about Pemberley as a character. The mystery of the novel progresses quite nicely, with enough twists and turns to keep you guessing until the ending, which ties everything up in a wonderful little bow. I do wish that the book did a better job of reminding you of earlier plot points in the mystery when things are revealed; I often found myself thinking, "Wait, did we learn that earlier? I guess we did." I also think it is worth noting that the five other children in the novel act as more supporting characters than main ones; Nooks & Crannies is more interested in exploring Tabitha's inner thoughts and feelings than it is in fleshing out all six of the children (which isn't necessarily a bad thing, but also isn't obvious from how the book is portrayed by the publisher). Despite these quirks, though, Nooks & Crannies is an extremely enjoyable read, with a main character you can root for, plenty of humor, and a mystery that will hold your interest until the very end!
Update (1/2/2021): My rating is: Pretty good!