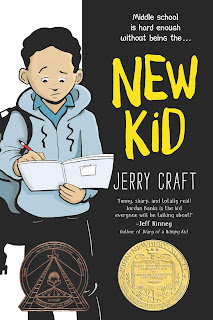 Winner of both the Newbery Medal (the first graphic novel ever to win!) and the Coretta Scott King Award for 2020, New Kid tells the story of Jordan Banks, a seventh-grader who enjoys drawing comics and cartoons. Jordan wants to go to art school, but his parents send him to Riverdale Academy Day School, where he struggles to fit in as a new student on financial aid (his family is not poor, but the school is very expensive) who also happens to be one of the only non-white students around. Jordan has to deal with the regular struggles of school (bullies, sports, weird kids, making friends, getting lost at a new school, etc.), but he also has to deal with stares and racial biases both unconscious and conscious. As Jordan starts to get acquainted with the school and begins to make good friends, however, he starts to realize that being the new kid maybe isn't so bad after all.
This book is INCREDIBLE! (The Newbery committee definitely found the right book to designate as its first graphic novel medalist). I don't believe I have ever seen a book that so deftly intertwines regular and realistic MG struggles with multi-sided explorations of complex social issues, all without ever taking itself too seriously. First, I have to discuss how this book deals with race. As a white person, I know shamefully little about what non-white people have to deal with in this world, and it seems that, in the already not-very-diverse field of MG books, there are even less books with black protagonists than there are with Hispanic or Asian protagonists. (In fact, I dare you all to look through your reviews and see how many books you have read and reviewed with protagonists who you can be sure are black—apparently, I have reviewed exactly 1. That is disturbing.) New Kid opened my eyes to what it is like today to be a black kid (and not a poor or uneducated black kid, mind you). Jordan and the other black students at Riverdale deal with teachers who call them by the wrong names and teachers who panic that everything they say is racist. A teacher gets mad at Jordan's friend Drew for calling him "dawg" even though a white boy named Andy (the antagonist of the book) calls people that daily with no repercussions. In a particularly jarring (especially for us book lovers) yet darkly humorous moment, Jordan and his friends visit the school book fair. A table at the fair titled "African American Escapist Literature" features books with titles such as "Escape from Slavery" and "Escape from Poverty," and the school librarian suggests a fantasy novel to a white student and a book about a poor black child with no father to a black student (who then replies that his father is the CEO of a Fortune 500 company). The book's exploration of race is nowhere near one-sided, however. At one point, a series of racist Secret Santa gifts turn out to have been intended with no racism at all (conscious or unconscious), and Jordan's two best friends in the book are Drew, another black kid who is also on financial aid to pay for school, and Liam, a white kid whose family is so wealthy and has donated so much to the school that they have an auditorium named after them. This book's exploration of race today means both that it should be required reading for white people and that it (I hope) acts as a much-needed depiction of being black in today's world.
What is especially great about New Kid, however, is that despite tackling heavy topics, it never wallows in misery. Jordan's struggles are never excessively awful (likely making the book far more relatable to most people): instead of never making friends and being mercilessly bullied, he makes several friends and deals with the occasional rude comments that come his way. Jordan is an excellent protagonist, being both a typical middle-schooler and extremely insightful for his age. Jordan's own comics (usually based on his own experiences) are interspersed with the rest of the story, giving us a unique look at his feelings. The book also has an interesting cast of characters: two I want to mention are Ms. Slate, an art teacher who broadens Jordan's idea of what art actually is, and Alexandra, a chipper girl who is always wearing hand puppets (for a reason) and is mocked for it (except by Jordan). Except in a few places, the dialogue between students is extremely authentic; this is not one of those books of unrealistic friendships and excessive heart-to-heart conversations (although there is still plenty of bonding). The book is also quite funny, with many jokes scattered through the pages and pop-culture puns used for the titles of the chapters (I suspect adults will get more of these puns than kids will). The graphic-novel format lends itself well to depicting school life, and author Jerry Craft's distinctive art style is unusually detailed and helps the illustrations stand out. Perhaps best of all, because New Kid is a graphic novel that only took me an hour or two to read, you have absolutely no excuse to not read it! With a variety of perspectives both new and familiar, all wrapped up in a package with nearly flawless execution, New Kid is a book that everyone should read: you will see yourself in it and learn a thing or two (or ten) at the same time!
Update (1/2/2021): My rating is: Stunning!