February 20, 2021
On today's episode of "They Thought It Couldn't Get Any Worse...And Then It Got So Much Worse," Texas has basically been in an apocalypse since Monday, with a winter storm spiraling out of control into complete losses of electricity and even running water. I was looking at these horrifying pictures on BuzzFeed, and people's homes have literally fallen into the 40s INSIDE. Good thing I totally lost faith in 2021 being a better year, because it's not. At least Ted Cruz is having a blast in Cancún.
I do want to mention a few good things in the world. First of all, I need to make everyone fully aware that Julie Murphy has THREE books coming out this year: Pumpkin on May 25, If the Shoe Fits on August 3, and Faith: Greater Heights on November 2. So that's awesome! Also, the North Texas Teen Book Festival is holding a completely online and free book festival this year on March 5/6, and the list of panels is truly star-studded with MG and YA authors: Katherine Applegate, Ibram X. Kendi, Jason Reynolds, Elizabeth Acevedo, Jennifer L. Holm, Chrystal D. Giles, Ibi Zoboi, Hena Khan, David Levithan, Jerry Craft, Christina Soontornvat, Shannon Messenger, Becky Albertalli, Julie Murphy, Angie Thomas, Stuart Gibbs, Gordon Korman, Soman Chainani, and way more that I won't bother to list here. Go check it out!
Moving on from that, all good things must come to an end (at least temporarily), and so it is with a heavy heart that I must draw our Four Weeks of Witches adventure to a close today. We took a look at a number of wonderful MG graphic novels over the past few weeks: first Snapdragon, then Beetle & the Hollowbones, then The Witch Boy and its two sequels! Today's final review in this saga is a bit different, because it is actually my first YA review in several months! (Weirdly, my last YA review was also a witch graphic novel—I did not know I had this reading tendency in my subconscious.) Today, we are taking a look at the graphic novel Mooncakes, written by Wendy Xu and Suzanne Walker.
A word of caution to any young readers: this is a YA (young adult) book, not an MG (middle grade) book, and it contains slightly mature content. 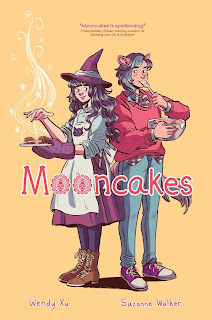