I realize it's Friday (not the ideal time for Thursday Thoughts), but this is when I could get this post put together, so here it is! Also, I think it bears noting that this is likely my last regular Thursday Thoughts post until December—I'm going to be frantically busy once again with college classes starting this Monday.

So what do I have for today? Well, a few weeks ago when I reviewed Goodbye Stranger by Rebecca Stead for the third (yes, third) time, I realized that, even if I couldn't re-read the book all the time, I wanted a way to re-experience some of the passages from the book whenever I wanted. Thus began my crafts project, in which the aim was to create a display for my copy of Goodbye Stranger that would showcase some of my favorite quotes from the book AND match the aesthetic of the book's beautiful cover!

(Please note: The quotes on my display contain SPOILERS, so I recommend not reading them within the images if you can help it.)

Step 1: Think about the design!

Before you buy supplies, you'll need to decide what color scheme you think will best complement your book's cover. I decided to use the yellow accent color from the cover (shown below) as the main background color for contrast. I originally planned to use the orange accent color prominently on the project as well, but you'll see that blue became the primary accent color and orange played a very minor role.

The project also uses a canvas, and you'll want to think about if you need a stand for the canvas, and if you do, what size stand you need to hold both the canvas AND the book in front of it. (It helps to bring the book with you to your crafts store of choice—and while you're at it, considering the endlessly problematic nature of Hobby Lobby, try shopping at Michaels or Joann!) 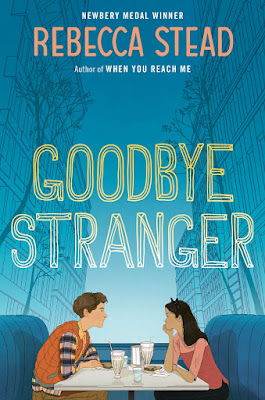 Step 2: Get your supplies!

I made a trip to Michaels for most of my supplies, and then I picked up some additional items at Walmart as my plans changed. Here's the gist of what you'll need: 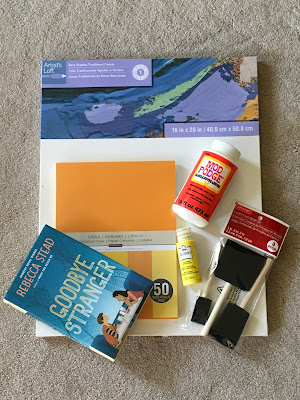 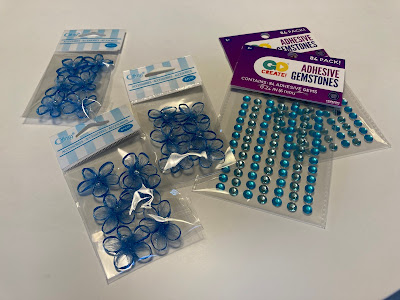 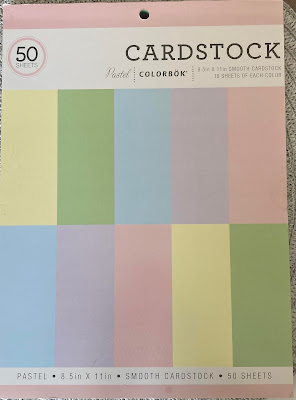 Step 3: Prepare your quotes!
This part is straightforward—find the quotes you love from the book you've selected and type them up.
I typed them in Google Docs because Google actually has a massive library of fonts that you can use for free in Google Docs, and you might be able to find the actual font your book is typeset in—check the front of the book for details, and then click on your font > More Fonts and try searching for its name. My edition of Goodbye Stranger is typeset in Goudy, which Docs actually had, so I was able to retype these to perfectly match the book!
(Also, do note that the font may look slightly weird in the actual document, but if you make a PDF to print out, it should look correct.)
I also made my quotes narrower by going to Format > Columns and choosing the two-column layout.
Then I printed my quotes on the orange Recollections cardstock (why does autocorrect keep changing that to "yardstick"?) and cut them out, as you can see below! 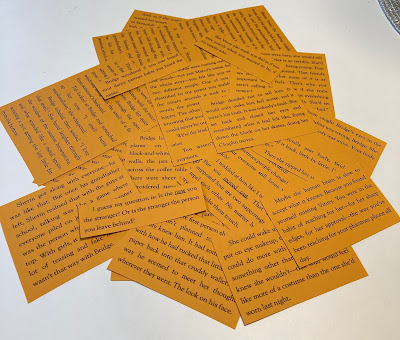 Step 4: Paint your canvas!
I used my canvas, my acrylic paint, and my foam brushes to paint the canvas the color I wanted, and then I left it to dry on the porch for about 24 hours. Make sure your brushstrokes are all in the same direction! Here's the painted canvas: 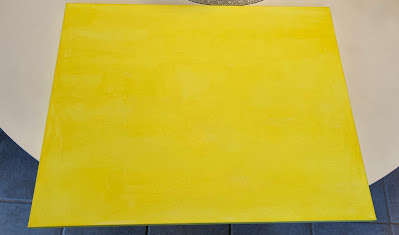 Step 5: Mark the location of the book!
The book isn't adhered to the canvas but just leans up against it, so it should go in the bottom-center of the canvas. Make sure to lightly mark the top corners of where the book will sit with a pencil—that way, even when the book isn't on the canvas, you can still decorate the canvas and know where the book will sit.
Step 6: Determine the quote layout!
I recommend laying your quotes down on the canvas before actually attaching them just to make sure they look good. In my case, I realized that using orange cardstock to match the orange accents on the book cover was just way too intense, as you can see below: 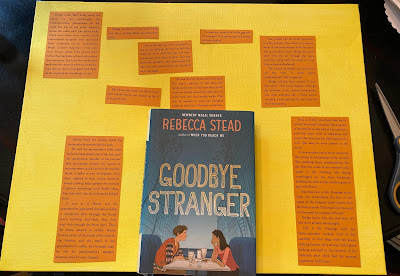 So I reprinted my quotes on the blue Colorbök cardstock: 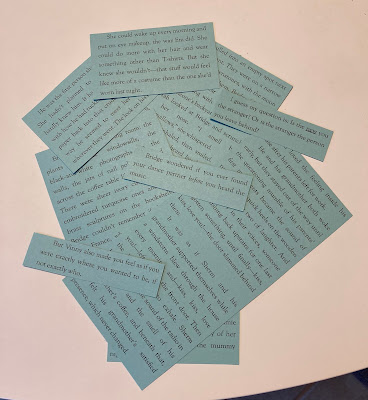 And then I tried again, and things looked MUCH better! I did keep the orange for the really short quotes just to break things up a bit.
My mom was a huge help in getting this project put together, and she and I attached the quotes to the canvas using Elmer's Glue so that they would stay put when we added the decoupage glue in a later step. 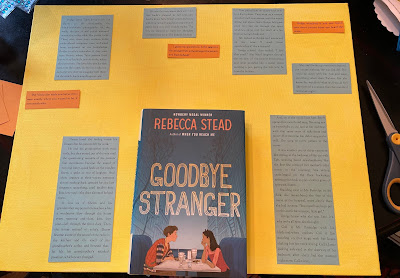 Step 7: Determine your decoration layout!
I decided I wanted to use the little gemstones to create an arch over the book itself. So I made dots with a pencil where each one would go (don't make them as dark as I did, or they won't erase if you change the layout and you'll have to paint over them again like I had to). But I didn't actually attach them until later.
I made this all one step because your process will vary depending on the decorations you use, but you'll see that I didn't decide on the layout of the little flowers until much later in the process. 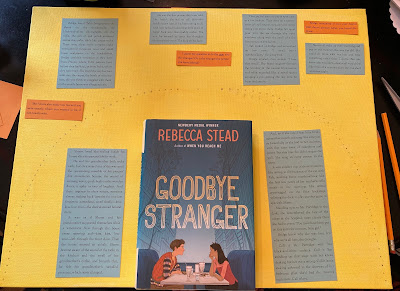 Step 8: Add two layers of decoupage glue!
My mom suggested we use decoupage glue to give the canvas a more cohesive appearance (instead of looking like a bunch of tiny pieces of paper with floppy edges stuck on a canvas). We used decoupage glue with a glossy finish, but you can choose whatever finish you think will look best.
So, before attaching any accessories, we removed the book and covered the canvas and quotes in a layer of the decoupage glue—and then, once it dried, we did it a second time to make sure everything was fully coated. You can see the glossy finish in the photo below: 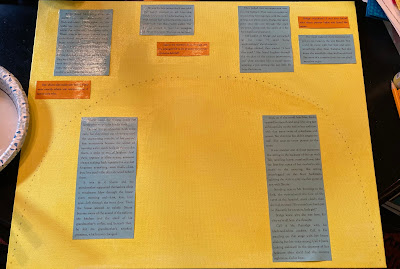 Step 9: Attach your decorations!
Once the decoupage glue dried, we attached the gemstones to create the arch using Elmer's Glue (they have their own adhesive, but we wanted them to stay on more permanently). We also used Elmer's Glue to attach the little flowers as a centerpiece above the book! (And we did the same for a few more flowers that I forgot to photograph, but you can see them at the very end.) 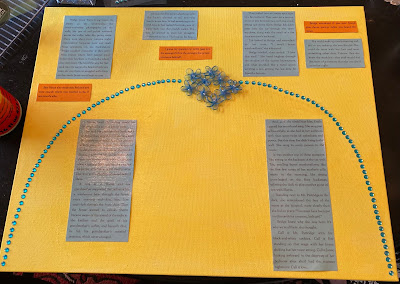 Step 10: Display!
Prop up the canvas and lean the book against it, and—voila! 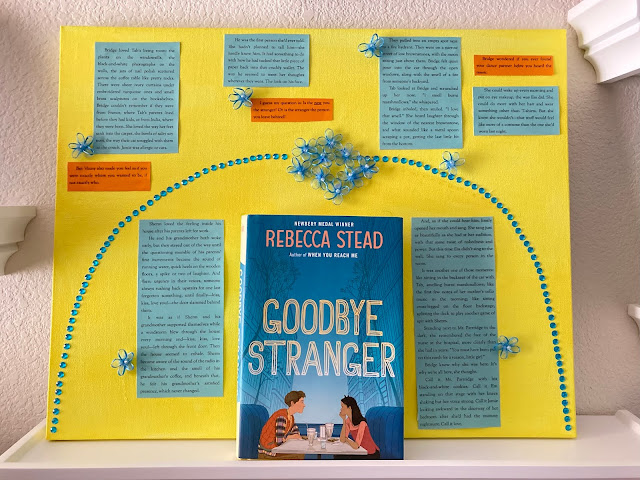 And here it is in context with my other books: 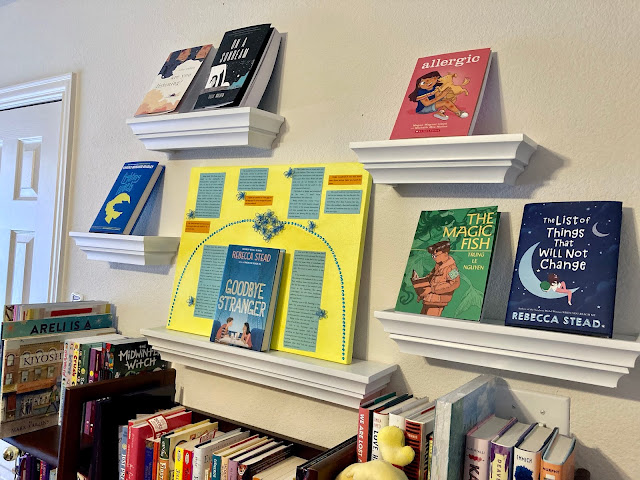 (Note the sneak preview of the book I'm reviewing tomorrow!)

That's it! Now I have a display for my favorite book of all time that's not only cute, but also lets me re-read some of my favorite quotes from the book whenever I want to.

Now it's your turn—if this project sounds good to you, try it out! And if you post a photo of it on your blog or social media page, post a link in the comments below—I'd love to see what you come up with!

Thursday Thoughts will be mostly going on hiatus after this post, but rest assured that my Monday reviews will remain as frequent and ramble-y as ever—I'll see you then!