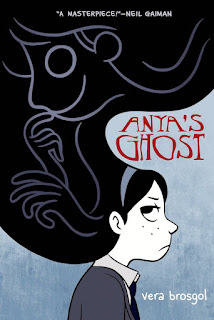 Anya could really use a friend. But her new BFF isn't kidding about the "forever" part . . .
Of all the things Anya expected to find at the bottom of an old well, a new friend was not one of them. Especially not a new friend who's been dead for a century.
Falling down a well is bad enough, but Anya's normal life might actually be worse. She's embarrassed by her family, self-conscious about her body, and she's pretty much given up on fitting in at school. A new friend—even a ghost—is just what she needs.
Or so she thinks.
Spooky, sardonic, and secretly sincere, Anya's Ghost is a wonderfully entertaining debut graphic novel from author/artist Vera Brosgol.

I really enjoyed this graphic novel! It is a very quick read (I read it in about an hour), as well as a very fun one. The main character, Anya, has a family who has only lived in America for several years, having come from Russia. Anya smokes in an attempt to seem cool, and she isn't a good student. Just a few pages in, Anya falls down a well, where she meets the ghost of someone who died in the well. Anya and the ghost become fast friends, at least until they have a falling out and Anya discovers something shocking about the ghost. Although Anya makes many mistakes, she is a likable character, and she is very realistic. I also enjoyed the book's theme, which is mainly about how we perceive people as having better lives than we do, when that may not be true. Finally, I love the art style of this book, which is drawn mainly in black and white, although the black has more of a purple look to it. All in all, Anya's Ghost is an entertaining, thoughtful, and just-creepy-enough read!
Labels: Graphic Novel Rating: 2 Graphic Novels Middle Grade Vera Brosgol