For MMGM, I am doing something a little different. As you might have noticed, all of my past MMGM posts have been recommendations, with little to no criticism. However, I have noticed that, for all the good books out there, some classics (i.e. those we are forced to read) aren't as good as many lesser-known books. Since I recently had to read a book for a school project, I have decided to review it while it's fresh in my memory. Therefore, I am reviewing The Red Pony by John Steinbeck, using the classic pros-and-cons style. 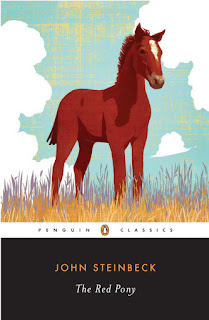 Verdict:
This book has many good qualities, but, in my opinion, its unrelenting sadness severely lowers its ranking. However, it could always be worse, and, for an old book, it is relatively enjoyable, featuring great writing (I can understand why it is a classic). I know many of you will probably disagree with me, but I still hope you enjoyed reading this review!