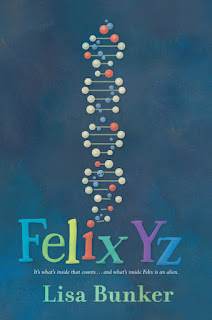 “If it wasn’t for the fused-with-Zyx thing, I suppose I would just be normal—whatever that means.”

When Felix Yz was three years old, a hyperintelligent fourth-dimensional being became fused inside him after one of his father’s science experiments went terribly wrong. The creature is friendly, but Felix—now thirteen—won’t be able to grow to adulthood while they’re still melded together. So a risky Procedure is planned to separate them . . . but it may end up killing them both instead.

This book is Felix’s secret blog, a chronicle of the days leading up to the Procedure. Some days it’s business as usual—time with his close-knit family, run-ins with a bully at school, anxiety about his crush. But life becomes more out of the ordinary with the arrival of an Estonian chess Grandmaster, the revelation of family secrets, and a train-hopping journey. When it all might be over in a few days, what matters most?

Told in an unforgettable voice full of heart and humor, Felix Yz is a groundbreaking story about how we are all separate, but all connected too.

Before I tell you all of the ways in which I loved this book, I first want to tell you that I originally heard about this book in a review by fellow MMGMer Greg Pattridge on his blog, Always in the Middle. (If you haven't been to his blog before, I suggest you do so immediately!) I am so glad that I bought this book for so many reasons! In the book, a teacher of Felix's explains to him that he has his own writing voice, which set the bar high for me, as a reader. Luckily, I was not disappointed! The way the sentences are written and the words used, you can practically hear Felix narrating the story. As you've probably noticed if you've read the description, Felix Yz has a very unique premise. The premise only gets more unique as the book goes on, however, with many other things, including an adventure-related plot point, coming into play. Even things that might be expected are still done well, such as Felix's often-humorous interactions with Zyx that lighten up some of the more depressing scenes. Finally, one of the book's major topics is gender. From characters who love others of the same gender (including Felix) to one who changes gender often and even a minor transgender character, Felix Yz shows that not conforming to gender norms is perfectly okay and irrelevant to who you are as a person. Every reader will find something to love or relate to in Felix Yz, making it a truly amazing read for anyone!
✨✨ Labels: Humans? Not Exactly... Lisa Bunker Middle Grade Realism Plus Fantasy