December 03, 2017
With all of the illness I have mentioned in previous posts, I have gotten behind on school projects which are due Friday (!). Therefore, instead of posting a review today, I am starting the Holiday Signed Book Extravaganza! What does that mean? It means that you can enter to win 5 different signed MG and YA books! Here's how it works: First, read through the below list of signed books that I am offering and their publishers' descriptions, and choose the books you would like to win.

Nightfall (Keeper of the Lost Cities #6) by Shannon Messenger

Sophie and her friends face battles unlike anything they’ve seen before in this thrilling sixth book of the New York Times and USA TODAY bestselling Keeper of the Lost Cities series.

Sophie Foster is struggling. Grieving. Scrambling. But she knows one thing: she will not be defeated.
The Neverseen have had their victories—but the battle is far from over. It’s time to change tactics. Make sacrifices. Reexamine everything. Maybe even time for Sophie to trust her enemies.
All paths lead to Nightfall—an ominous door to an even more ominous place—and Sophie and her friends strike a dangerous bargain to get there. But nothing can prepare them for what they discover. The problems they’re facing stretch deep into their history. And with time running out, and mistakes catching up with them, Sophie and her allies must join forces in ways they never have before.
In this spectacular sixth book in the New York Times and USA TODAY bestselling Keeper of the Lost Cities series, Sophie must uncover the truth about the Lost Cities’ insidious past, before it repeats itself and changes reality.

Turtles All the Way Down by John Green

It’s quite rare to find someone who sees the same world you see.

Sixteen-year-old Aza never intended to pursue the mystery of fugitive billionaire Russell Pickett, but there’s a hundred-thousand-dollar reward at stake and her Best and Most Fearless Friend, Daisy, is eager to investigate. So together, they navigate the short distance and broad divides that separate them from Russell Pickett’s son, Davis.

Aza is trying. She is trying to be a good daughter, a good friend, a good student, and maybe even a good detective, while also living within the ever-tightening spiral of her own thoughts.

In his long-awaited return, John Green, the acclaimed, award-winning author of Looking for Alaska and The Fault in Our Stars, shares Aza’s story with shattering, unflinching clarity in this brilliant novel of love, resilience, and the power of lifelong friendship.

Kids of Appetite by David Arnold

Victor Benucci and Madeline Falco have a story to tell.
It begins with the death of Vic’s father.
It ends with the murder of Mad’s uncle.
The Hackensack Police Department would very much like to hear it.
But in order to tell their story, Vic and Mad must focus on all the chapters in between.

This is a story about:

1. A coded mission to scatter ashes across New Jersey.
2. The momentous nature of the Palisades in winter.
3. One dormant submarine.
4. Two songs about flowers.
5. Being cool in the traditional sense.
6. Sunsets & ice cream & orchards & graveyards.
7. Simultaneous extreme opposites.
8. A narrow escape from a war-torn country.
9. A story collector.
10. How to listen to someone who does not talk.
11. Falling in love with a painting.
12. Falling in love with a song.
13. Falling in love. 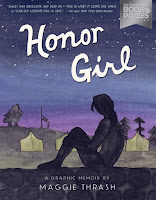 All-girl camp. First love. First heartbreak. At once romantic and devastating, brutally honest and full of humor, this graphic-novel memoir is a debut of the rarest sort.

Maggie Thrash has spent basically every summer of her fifteen-year-old life at the one-hundred-year-old Camp Bellflower for Girls, set deep in the heart of Appalachia. She's from Atlanta, she's never kissed a guy, she's into Backstreet Boys in a really deep way, and her long summer days are full of a pleasant, peaceful nothing . . . until one confounding moment. A split-second of innocent physical contact pulls Maggie into a gut-twisting love for an older, wiser, and most surprising of all (at least to Maggie), female counselor named Erin. But Camp Bellflower is an impossible place for a girl to fall in love with another girl, and Maggie's savant-like proficiency at the camp's rifle range is the only thing keeping her heart from exploding. When it seems as if Erin maybe feels the same way about Maggie, it's too much for both Maggie and Camp Bellflower to handle, let alone to understand.

Tales of the Peculiar by Ransom Riggs

Before Miss Peregrine gave them a home, the story of peculiars was written in the Tales.

Wealthy cannibals who dine on the discarded limbs of peculiars. A fork-tongued princess. These are but a few of the truly brilliant stories in Tales of the Peculiar—the collection of fairy tales known to hide information about the peculiar world, including clues to the locations of time loops—first introduced by Ransom Riggs in his #1 bestselling Miss Peregrine’s Peculiar Children series.

Riggs now invites you to share his secrets of peculiar history, with a collection of original stories in this deluxe volume of Tales of the Peculiar, as collected and annotated by Millard Nullings, ward of Miss Peregrine and scholar of all things peculiar. Featuring stunning illustrations from world-renowned woodcut artist Andrew Davidson this compelling and truly peculiar anthology is the perfect gift for not only fans, but for all booklovers.

Now that you have decided which books you would like, fill out the form below! As a courtesy to others, do not select books you do not actually want, as you may end up winning them and taking them away from those who do want them. You will be entered in a separate drawing for each book you select, so you may win more than one book. Your entry must be made using the Google Form below. Entries in any other form, such as by comment, will NOT be accepted. Comment-based entries will be deleted for your privacy. Your email address will not be published; it will only be used to, if you win, alert you and request your mailing address. Your nickname (which does not need to be your real name) WILL be published on this blog to announce who has won the giveaway. To protect the entrants' privacy, all entries will be deleted after the giveaway ends. I will close the giveaway entry form on the morning of Tuesday, December 12, 2017 (in Central Time). All entries placed before the form is closed will be accepted. If a winner does not respond with a mailing address within 48 hours after I send an e-mail requesting one, I will choose a new winner and alert the former winner. Be sure to check your spam or junk folder if you do not see my request! (P.S. When you submit, the confirmation will be at the top, so scroll up!)