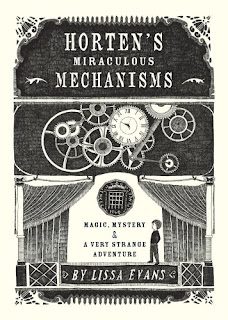 As if being small for his age and also having S. Horten as his name isn't bad enough, now 10-year-old Stuart is forced to move far away from all his friends. But on his very first day in his new home, Stuart's swept up in an extraordinary adventure: the quest to find his great-uncle Tony--a famous magician who literally disappeared off the face of the earth--and Tony's marvelous, long-lost workshop. Along the way, Stuart reluctantly accepts help from the annoying triplets next door… and encounters trouble from another magician who's also desperate to get hold of Tony's treasures.

I really enjoyed this book! When I was browsing back through it today (I read it several years ago), I found myself completely absorbed in Stuart's mission to find the workshop. The plot is fast-paced, moving from place to place and from clue to clue, but with ample moments of calm, such as when Stuart talks to an old woman named Leonora who knew his great-uncle. The clues (consisting of various magic tricks and machines) that make up the mystery of the book are fascinating, and the final revelations of the book make the whole journey worthwhile. Readers will eventually grow to love Stuart's annoying neighbors, April, May, and June, especially April, who helps Stuart figure out the meaning of the later clues. Also, Stuart and April's struggles with their own physical flaws (Stuart is short as mentioned and will probably stay that way, while April sometimes makes mistakes due to her poor vision) help add in a bit of a moral, which is that people are not defined by these physical traits (as evidenced by Stuart's famed great-uncle also being very short). Horten's Miraculous Mechanisms is an excellent novel that any reader will zip through and thoroughly enjoy!
✨✨ Labels: Intriguing Mysteries Middle Grade My Family Read-Alouds