It’s time for another Classic Critique! I haven’t had much time recently to read new books, but, for school recently, I had to read A Separate Peace by John Knowles. Since I have already spent much time analyzing and studying it, I figured I might as well review it! (F.Y.I. I wouldn't be shocked if this review ends up working better as a commentary for people who have already read the novel, since it will probably turn most readers away from the book.) 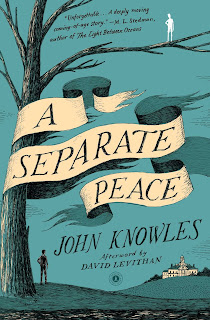 An American classic and great bestseller for over thirty years, A Separate Peace is timeless in its description of adolescence during a period when the entire country was losing its innocence to World War II.

Set at a boys' boarding school in New England during the early years of World War II, A Separate Peace is a harrowing and luminous parable of the dark side of adolescence. Gene is a lonely, introverted intellectual. Phineas is a handsome, taunting, daredevil athlete. What happens between the two friends one summer, like the war itself, banishes the innocence of these boys and their world.

Verdict:
In writing this review, I came to an interesting conclusion: John Knowles should have been a poet instead of an author. He had incredible talent with regards to figuring out how people think and are affected by the events of their lives, and he was also excellent with metaphors and imagery. However, he had trouble creating characters that people could root for and designing a plot that people would race through (neither of which would have been a problem in the short-form art of poetry). All in all, Knowles was able to write a book which had many great qualities, helping to make it a classic, but several large missteps, which may be harder for future readers to overlook.
✨✨ Labels: Adult Books Classic Critique