March 18, 2018
Just after its new movie adaptation has been released, I am recommending A Wrinkle in Time by Madeleine L'Engle for MMGM (and including a bonus movie review below!). 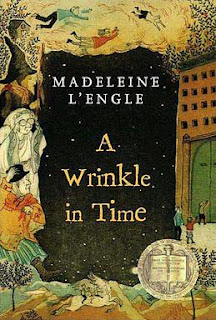 A Wrinkle in Time revolves around a young girl named Meg Murry, whose father, a scientist, vanished several years before the book's events. When her younger brother, Charles Wallace, befriends three strange women (who turn out to be magic), both of the kids, along with a kind classmate from Meg's school named Calvin, end up going on a quest across the universe to find their father. I loved this book when I read it as a young kid (I was only about 5 or 6), and I still love it now! One of the best parts of the novel is how it is not like other fantasy or sci-fi books. Instead of filling the book with tons of background information about the universe and its workings, L'Engle instead gives just enough information to understand how the characters are traveling across the universe (or "tessering") and what exactly they are fighting against (although a main point of the book is that the human brain is simply incapable of fully understanding the universe). Despite keeping the book simple enough for readers to understand, L'Engle still creates imaginative settings of unique, beautiful planets (and one dystopian one where everyone has to act exactly the same, fill out forms for nearly every event in their lives, and face vague yet disturbing punishments). Another great part of the book is Meg's development throughout the story. Toward the beginning of the story (and during most of the middle), she often gets irritated and impatient, annoying those around her, but she does desperately want to locate her father. As the book goes on, however, Meg becomes more brave and is able to use her intelligence to fight against the book's main villain, IT, in an ingenious way. A Wrinkle in Time is simple enough for young children to understand, yet complex enough to hold the attention of older kids or adults and become a favorite book of theirs!

Bonus movie review: As soon as I saw the preview for the new movie adaptation of A Wrinkle in Time, I was thrilled! In sixth grade, I had to read the novel yet again and see the awful 2003 movie version, which was made for TV and featured horrendous acting, cheesy effects, and scenes that detracted from the original point of the book (and had sets so ugly that I couldn't even focus on the action!). I worried a little after seeing the very mixed reviews of the new movie (it has a very low score on Rotten Tomatoes), but, after seeing it, I think anyone who has read the book will love the new movie! The new movie is not completely the same as the book: the formerly all-white characters have been changed to include a mixture of races (which I'm all for!), irrelevant characters such as Meg's siblings Sandy and Dennys have been erased, and several new scenes have been added. However, as I watched the movie, I wished that the new scenes had been in the book, as they helped to highlight some of the book's main themes (such as Meg's growing maturity) even better! The movie has fantastic actors: Storm Reid, who plays Meg, does a great job of showing her emotions, struggles, and personality during the movie. The three magic women who guide Meg and her companions, Mrs. Which, Mrs. Who, and Mrs. Whatsit (played by famous actresses Oprah Winfrey, Mindy Kaling, and Reese Witherspoon, respectively) are depicted fabulously, with their unique outfits and great lines (sometimes wise, sometimes funny) helping to show their magic and magnificence even more than in the book! Finally, the new movie has great special effects that take exactly what readers imagine the book to be like and make it even better! As I saw the new film, I was practically glued to my seat, as any viewer will be if they take my advice: ignore the bad reviews, and go see this movie NOW!
✨✨ Labels: Grown-Ups Take the Stage Middle Grade My Family Read-Alouds Travels Through Time TV/Movie Adaptations of Books