April 15, 2018
For MMGM, I am reviewing Nightfall (the sixth book in the Keeper of the Lost Cities series) by Shannon Messenger. 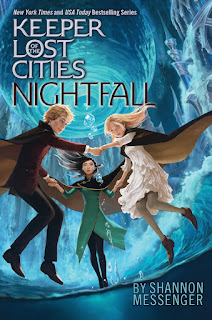 I've been a fan of the Keeper of the Lost Cities series since before the third book came out; it's actually the reason I discovered MMGM (which was until recently run by Messenger) and joined it! This book has many of the same qualities that have made the rest of the series great. The characters are so true to their personalities and so layered that I literally could imagine meeting one of them in real life. Parts of the novel are deep and poignant (the struggles involving characters' families and friends make sure of that), while others are hilarious and break the tension (just flipping through the book, I found several amusing lines). This novel has a special emphasis on the relations between the world's different intelligent species: new members of the warlike ogres are introduced, and the history  between the elves and humans is further explored (Nightfall itself plays a major part in this history). If I had one criticism of the novel, it would be that very few of the series's plot lines have been tied up, making the book seem slow at times. The seventh and final novel (unless Messenger extends the series again), Flashback, must now end the series properly without seeming disjointed. With all of the events that have occurred in this most recent book, however, I am still desperately excited to read the next book in the series, as any reader will be!
✨✨ Labels: Middle Grade Shannon Messenger