August 19, 2018
Since school's started back up, I have very little time to write this post, so I'll keep it short! For MMGM, I am recommending The Wednesday Wars by Gary D. Schmidt. 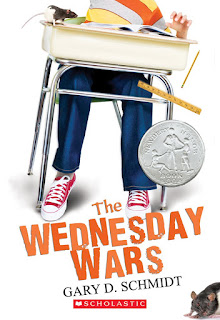 Gary D. Schmidt offers an unforgettable antihero in The Wednesday Wars — a wonderfully witty and compelling novel about a teenage boy's mishaps and adventures over the course of the 1967-68 school year.
Meet Holling Hoodhood, a seventh-grader at Camillo Junior High, who must spend Wednesday afternoons with his teacher, Mrs. Baker, while the rest of the class has religious instruction. Mrs. Baker doesn't like Holling — he's sure of it. Why else would she make him read the plays of William Shakespeare outside class? But everyone has bigger things to worry about, like Vietnam. His father wants Holling and his sister to be on their best behavior: the success of his business depends on it. But how can Holling stay out of trouble when he has so much to contend with? A bully demanding cream puffs; angry rats; and a baseball hero signing autographs the very same night Holling has to appear in a play in yellow tights. As fate sneaks up on him again and again, Holling finds Motivation — the Big M — in the most unexpected places and musters up the courage to embrace his destiny, in spite of himself.
2008 Newbery Honor Book

I read this book when I was in eighth grade, and I recall that, not only did I enjoy the novel, but so did the rest of my class! The Wednesday Wars takes place over the course of a single school year and chronicles narrator and protagonist Holling's experiences and mishaps. Instead of having a plot to move things along, the novel instead features many smaller storylines that discuss, amongst other things, Holling's selfish father and other family, his relationship with his teacher, or random events such as dealing with classmates or performing in plays. One of the best parts of the novel is how true it is to the era it is set in. The Vietnam War takes teachers' spouses to Vietnam, sends refugees to the school, and even prompts characters to join the anti-war movement or become hippies. The book also mentions current events relating to politics or civil rights, helping to make the book an interesting look into another time. Despite these topics, The Wednesday Wars still manages to be absolutely hilarious at times, such as when describing Holling's exaggerated struggles or other random occurrences (such as the "angry rats" mentioned in the publisher's description). The Wednesday Wars's combination of interesting plot events, hilarity, and important topics makes it a book that absolutely everyone should read!
✨✨ Labels: Middle Grade