August 26, 2018
For MMGM, I am recommending The Family Under the Bridge by Natalie Savage Carlson. 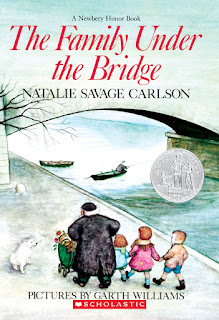 This extremely short (about 130 pages) Newbery Honor book, which was first published all the way back in 1958, tells the story of a homeless man named Armand who is perfectly content with his life, in which he has given up responsibility and is free to do what he wants. However, Armand then finds a homeless single mother and her three children living under the bridge in Paris that he also lives under. He initially dislikes this family but later begins to bond with the children and take care of them while their mother works. Armand ends up trying to help the children and their mother find a home after realizing that having some responsibility in life can be worth it. This novel is fun to read, with Armand and the children's adventures helping to maintain an upbeat tone. The book's short length also works to make the book a breeze to move through! However, The Family Under the Bridge also tells an important story that can teach young children to have empathy for the homeless and not blame them for their plight, making it a valuable book that I wholeheartedly encourage everyone to read!
✨✨ Labels: Middle Grade