December 22, 2019
For MMGM, I am recommending Wishtree by Katherine Applegate. 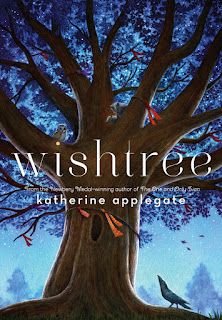 I've enjoyed several of Katherine Applegate's books through the years, such as Crenshaw (see my review here) and Newbery-Medal-winning The One and Only Ivan (learn about the movie adaptation here), which is why I was excited to read this novel. In addition, it seems that I am not the only one who enjoyed Wishtree, as Stephanie Robinson reviewed it for MMGM just a few weeks ago (her review is here).
Most middle-grade novels are from the perspective of a middle-grader. Wishtree is from the perspective of a tree. The tree, a 216-year-old red oak named Red, spends their days housing a variety of animals (from opossums and owls to their best friend, a crow named Bongo), sharing semi-irritating wisdom and terrible jokes with Bongo, and observing the people in the neighborhood where they live. Red is more than a regular tree, though; they are a wishtree. Every year, on Wishing Day, people in the neighborhood write their wishes on cloths or scraps of fabric and tie them to Red's branches. The tradition of Wishing Day has always brought Red's neighborhood together, but, when a Muslim girl named Samar and her family move into the neighborhood, some people's attitudes begin to break the neighborhood apart. As Samar, who is already lonely, has to deal with hate speech and cruelty, Red, who likes Samar, begins to wonder how to help her. And it doesn't help that a neighborhood woman named Francesca wants to cut Red down. Red wishes they could help Samar and feels resigned to their fate of being chopped down, but they're just a tree: they can't do anything about either issue. Right?
I loved this book for so many reasons! One of the best parts of Wishtree is just how interesting it is to have a tree as a protagonist. Red's life as a tree is very different from the life of a human, and Applegate does a fantastic job of noticing and writing about all of the interesting aspects in trees' lives: hollows, roots, pruning, etc. Red also acts as a sort of parental figure in the story, providing shelter (and some companionship) to all sorts of animals, all of whom put aside their competitive/angry/hungry instincts to live together in semi-harmony. Seeing the animals, with their families, personalities, and fears, was a reminder that humans are not the only species with interesting lives that should be valued and protected. Red is a shining example of this as well, having accumulated enormous amounts of wisdom both from living with countless animals over the years and from observing humans, their communities, and, of course, their traditions (such as Wishing Day). This novel is an excellent reminder of the beauty that can be found in the plants and animals of nature
Wishtree has more excellent themes than just the beauty of nature. Discrimination has remained a common theme in our society, and discrimination against Muslim people has only grown in recent years. Thus, it is always good to see a book that explores this topic, and I found one detail of the book interesting: a boy named Stephen in the story becomes friends with Samar over time, in spite of his parents' avoidance of Samar's parents. Perhaps, like in the novel, young people will learn tolerance and kindness and avoid the mistakes/cruelty of those before them. Another theme of the book that I liked is the importance of community and tradition. Red explains how the tradition of tying wishes to trees traveled from Ireland through a neighbor long ago, and it is fascinating to see how such a tradition continues to bring people together even in modern times. Again, a strong community can also be seen in the animals that live under/in Red; they are an excellent example of a community whose members put their differences aside to keep each other safe. Although such a close-knit community of different animals does not tend to occur in real life, it is still a great ideal that humans should attempt to emulate. Finally, I enjoyed getting to see Red's dilemma about helping Samar, despite her being human; Applegate does an excellent job of allowing Red to have an impact on the human aspect of the story without having so much of an impact as to make the ending unrealistic or unsatisfying.
With such an interesting protagonist, so many great themes, and such excellent, distinctive writing, Wishtree is a fantastic novel that readers of all ages will enjoy!
Update (1/2/2021): My rating is: Really good!