June 13, 2020
Before we get started, I want to remind everyone that (if you're reading this on Monday) today is the last day to enter the 2020 Books by Black Voices Giveaway! Click here to see the giveaway details and enter the giveaway.
A few days ago, I saw that Joanne R. Fritz at My Brain on Books had just read and enjoyed Long Way Down by Jason Reynolds. This book has been sitting on my shelves for a while now, and since I'm trying to spotlight more books by Black authors on this blog, I decided to read it (which did not take long) and review it! 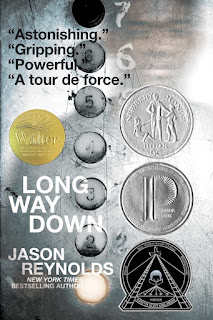 Long Way Down is extremely different from most novels, because it is written in verse that barely covers 25% of each page, making it an extremely short and to-the-point read. Long Way Down is narrated by Will, a teenager whose older brother Shawn has been murdered in the street. Will knows that there are three rules everyone in his neighborhood follows: don't cry, don't snitch, and kill whoever kills the people you love. Will is prepared to walk out of his building with a gun and kill the person he thinks killed Shawn, but the minute-long elevator ride from the seventh floor down to the lobby is a surprisingly drawn-out and supernatural one that makes Will wonder if what he's about to do will actually solve anything.
This book is absolutely stunning. To start off, I want to answer a few of the questions you might be asking in your head at this moment. You might be wondering if the grim subject matter of this book makes for a depressing or upsetting read. The answer: it absolutely doesn't. This book does not wallow in sorrow, as it is amazingly fast-paced (you'll read the whole thing in an hour or less, even if you're not a fast reader), and it leaves readers with a sense of hope at the end. This book is the rare book that opened my eyes to an issue I had never really thought about without feeling like torture to read. Will's narration is so gorgeously written, so precise and spot-on, so deep and thoughtful but always realistic for a teenager, that I could barely pry my eyes off of the pages. This book deals with the dull yet sharp pain of grief, the cyclical nature of gun violence, and the beauty of the lives that have been so brutally ended, but it does so in a way that makes you turn the page instead of set the book down. It's such a stunning feat that I wouldn't have thought it was even doable until I read the book.
You might also be wondering what exactly happens in the elevator ride. I don't want to say too much, because I enjoyed going in without much of a sense of what would happen in the book, but I will say that it is drawn-out and touching yet adrenaline-filled and hair-raising. What happens on the elevator isn't necessarily logical; you might wonder if there's magic in the story or if it's just in Will's mind, but then you'd be missing the point. I've always had a mild fear of rickety small metal boxes elevators, so I completely appreciated that such an unusual and at times unnerving story was mostly set in one. During the ride, you'll see the ways in which gun violence has affected Will's own life and the lives of the people it has killed. That's all I will say about the ride in this post, but rest assured that the story will meet all of your highest expectations.
I want to mention a few other things. First of all, there isn't much time in a story like this one for characterization, but I did appreciate the detail that Will enjoys thinking of anagrams. There are a few anagrams scattered through the story that relate to the events currently happening, and there is one page where Will wishes he could think of an anagram for the word "poser." I found it funny that an anagram for the word could be "prose," because telling this story in prose instead of the verse it is written in would absolutely have sucked the genuine feelings right out of this story. The verse in this book is beautiful and spare, sounding just like it would come out of a teenager's mouth but also being more thought-provoking than quite a few regular poems. This book also relies on design and layout in a way that few books do. The poems are placed or spread out on the page in a way that actually adds meaning to them and is not just some cheap gimmick, and the pages have rough background patterns that change mildly and add emotion to the story. I thought it was neat to see a book rely so much on design and layout to tell its story.
Although I can't write any more for fear of spoilers, I can say that Long Way Down is an absolutely incredible novel that is unlike any other. Perhaps the best part of this book is that it is quite a short read, which means that you can easily cram it in after (or even in the middle of) whatever book you are reading now! I hope you will buy or borrow a copy of this book so that you too can see how thrilling, deep, touching, and complex it is!
Update (1/2/2021): My rating is: Stunning!