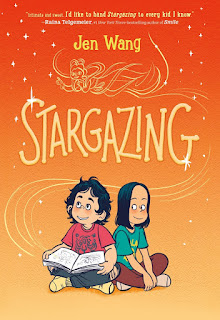 I discovered Stargazing on Amazon and decided to order a copy, and I'm so glad I did! Stargazing revolves around Christine, a somewhat-quiet girl who has more acquaintances than friends in the Chinese-American neighborhood where her family lives. Christine devotes a lot of energy to getting good grades and playing the violin, but her life isn't hugely fun until she meets Moon. Moon is a girl whose mother has fallen on hard times, so Christine's family allows the two to move into a small guesthouse next door to their own house. Moon is energetic, fun-loving, and extremely friendly, and although it seems like Christine wouldn't be Moon's first choice of friend, Moon coaxes Christine out of her shell and into a world of fun. Moon even tells Christine about the visions she has of beings from the stars, who tell Moon that she belongs with them. When something awful happens to Moon, it becomes Christine's job to return the enormous kindness that Moon has given her.

I've read a lot of books that I enjoy, but that I wouldn't necessarily look at again. The strange thing about Stargazing is that, rationally, it has several flaws, but emotionally, I loved it so much that I already know I'll be rereading it in the future. First of all, Christine and Moon's friendship is one of the sweetest friendships I've ever seen in a book. The two girls have so much fun and bond so much that your heart can't help but metaphorically swell with joy (a feeling we could all use right now). One particularly sweet moment is when Moon introduces Christine to the music of a K-pop (Korean pop music) singer and then teaches her how to dance to the music. You might be thinking that a friendship between a quiet, studious girl and an exuberant, outgoing girl wouldn't normally happen, but you'll see in the book that there's a reason why Moon isn't best friends with everyone else already.

I also love the way that Stargazing depicts Moon and Christine's community. It is too often that people lump every Asian person together into a jumbled mass of stereotypes and cultural ideas. This book challenges those assumptions, in large part through the contrast of Christine and Moon. Christine's family is Christian, and Moon's is Buddhist; Christine learns Chinese from her parents, while Moon knows none at all. Seeing the contrast between these two girls and their families is a good reminder of how much variety there is not just between races, but between the members of those races. I particularly liked the way in which Christine's and Moon's parents are depicted. Christine's parents expect her to get good grades, practice her musical instrument, and learn Chinese, but they're more multifaceted than that: they have fun with her at several points in the story, and they're willing to listen to Christine when she needs to talk. Moon's mother flies even further in the face of stereotypes: if anything, she is a bit too hands-off with Moon, although she, too, is a warm and loving woman. This book is particularly fascinating in that, instead of being a book about the one Asian child in a sea of white kids, it's a book about many different Asian kids (and some white ones) with different beliefs and values who nevertheless get along.

There are a couple of other things I enjoyed about Stargazing. There's an interesting point in the book about how bullies are not villains, but are just flawed human beings like everyone else. I also appreciated that a popular white girl named Madison who attends Christine and Moon's school never became the villain of the story or did anything cruel; a lot of books equate "popular" with "mean," even though that doesn't have to be true. Lastly, although I say this about every graphic novel, I really liked the art style of Stargazing, which is expressive and somehow looks crisp and flawless even with a few stray lines.

As I mentioned earlier, when I think rationally, there are a few flaws with Stargazing. There are moments when the dialogue is a bit clumsily written, and the book occasionally tried to make readers take leaps of faith that certain characters would do certain things that I remain unsure were in character for them. Again, though, there are a lot of books that I read that are objectively almost-flawless but that don't, to quote Marie Kondo, "spark joy." Stargazing actually "sparks joy" for me, and it will definitely be going on my bookshelf for me to reread in the future. Stargazing only took me an hour to read (and I tend to move slowly through graphic novels), so its joy doesn't last long, but the great thing is that you could read it today (perhaps with OverDrive) without messing up your already-planned to-be-read schedule. With its sweet, compelling plot, excellent cultural depiction, and wonderful art style, Stargazing is a book that I am thrilled to recommend!
Update (1/2/2021): My rating is: Pretty good!