*Rant begins here* You might have noticed that I usually talk about books on this blog, but I do occasionally take moments to talk about TV, and I have to do so right now. If you've been paying attention to the animated TV landscape, you might have noticed that, between the influx of animated TV shows for adults and the launching of various "children's" animated TV shows that appeal to teens and adults, animation is no longer strictly for kids. And nowhere is that more apparent than Infinity Train, a show that just came out last August that I absolutely love. Infinity Train has 3 seasons, each of 10 11-minute episodes, that chronicle different kids finding themselves aboard a train of infinite cars filled with their own bizarre universes, all traveling to who-knows-where, as they try to figure out what the glowing numbers on their hands mean and how to avoid the various terrifying creatures trying to murder them. There's some substantial violence and horror that I would say gives it a teenager-or-older audience, but there's also some substantial exploration of real-world topics, most recently the ways in which people adopt discriminatory beliefs and hang on to them for dear life (an interesting allegory, considering, you know...*gestures at world*) (and also an allegory that's crazy-deep for any show, let alone a kids' show). And the show also manages to be fun and hilarious at times. You can maybe tell that the show is not a normal kids show, and that's precisely why I love it so much. The reason I'm telling you about it is that season 3 ended on a cliffhanger, which they've never done before, and of course now the show is teetering on the edge of cancellation if it doesn't get really good ratings. Since I have a voice to mindlessly yell into the Internet void with, I figured I would mindlessly yell this: watch Infinity Train! Please! It is now exclusive to HBO Max (you know, everyone's favorite streaming service that had an incredibly smooth and well-organized launch), and I know you can't watch HBO Max on Roku or Amazon Fire TV (wow, doesn't this just sound worse and worse to you?), but you can watch on phones, tablets, computers, Chromecast, PS4, Xbox One, and more—and you can get a 7-day free trial that's honestly plenty of time to watch the whole show, so click here, sign up, and enjoy the craziest, deepest, and most terrifying cartoon you've ever seen! (And no, I'm not sponsored by HBO Max.) *Rant ends here*

Okay! Now that all that's done, for MMGM and #IMWAYR, I am recommending On the Horizon by Lois Lowry, with illustrations by Kenard Pak. 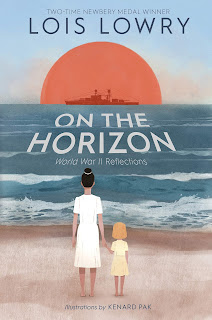 MMGM bloggers Patricia Tilton and Maria Antonia both recommended this book, so I finally read it, and I'm excited to discuss it with you all! On the Horizon can be described as many things: two-time Newbery medalist Lois Lowry's newest book, Lowry's first book in verse, an extremely short book (80 pages), or a book with beautiful illustrations by Kenard Pak. Above all else, though, On the Horizon can be described as a book that describes not the tragedies of Pearl Harbor and Hiroshima during World War II, but the people who were affected by them (and yes, when I say "affected," I do mostly mean "killed"). When Lowry was a young child, she lived on an island in Hawaii where, she discovered after watching old home videos, the USS Arizona was visible on the horizon before it was sunk. Then, as an older child, Lowry and her family moved to Japan after the war was over, making her an outsider among people who had pretty good reasons to be wary of Americans (like the whole we-literally-killed-eighty-thousand-of-their-civilians-with-one-bomb thing). Lowry ties her proximity to both of these tragedies of the war into the stories of the people who actually died in (or lived through) these tragedies. On the Horizon is not a book of statistics or facts about war; it is a book about people, and how war sucks the beauty and life out of people everywhere.
On the Horizon isn't a perfect book, but it definitely deserves credit for many things. From a young age, we are conditioned to think about war as something that is necessary or even interesting, ignoring the actual pain and suffering that results from it. We think of people who died as numbers, not as actual human beings with dreams and potentials and families and friends. On the Horizon attempts to counteract this mindset through many poems that act almost as micro-biographies for the people killed in the war, whether they are young parents on the USS Arizona or toddlers riding tricycles in Hiroshima. Lowry shares enough details, lists enough people, and spins enough meaning out of everything that you can't help but understand how even one death from a war is a tragedy of the highest order, much less the 1,200 from Pearl Harbor or the 80,000 from Hiroshima.
For someone who has never written a book in verse before, Lowry's use of the form is quite impressive. On the Horizon doesn't read like prose that has line breaks; instead, the verse adds rhythm and meaning that would not be there in a prose novel. This is going to sound pretentious, but the spareness of verse also echoes the spareness and emptiness of the lives lost in these tragedies, which makes it that much easier for readers to understand why each death is such a loss. Three times in the book, Lowry uses a format of poem I had never heard of called a triolet in which the first, fourth, and seventh lines are the same, and the second and eighth lines are the same. Her poems in this format are particularly beautiful, especially with the repetition of each line (the format seems to put the repetition in the perfect places each time). I did find the transitions between loose-rhythm free verse and strict-rhythm rhyming verse throughout the other poems somewhat jarring, but it wasn't much of an issue.
Some other thoughts: Lowry's own presence in the story is a mixed bag: sometimes it just feels shoehorned in, considering she wasn't actually someone terribly affected by the pain on either side of WWII, but sometimes she acts, interestingly, as a stand-in for readers, grappling with the same thoughts and feelings that readers are grappling with. I remain unsure whether or not giving equal weight to an event in which 1,200 military members died and an event in which 80,000 civilians died was the right thing to do, but I did like how doing so made sure that no side got more or less credit for killing more or less people, thus reiterating the point that all deaths are tragic, regardless of their quantity. I am a bit unsure what age range this book would be good for; the short length and some of the poems (particularly the rhyming ones) feel aimed at a young age, but the morals of the story might be better grasped by older readers. Lastly, I must give tons of credit to the illustrator, Kenard Pak, because his frequent minimalist illustrations (like that of the cover, but monochrome) add even more feeling and beauty to the story.
All in all, although not every aspect of On the Horizon landed with me, the ultimate moral, which is that war is far worse than what mere statistics can portray, is one that I can absolutely get behind. Lowry's writing and Pak's illustrations further carry this story to excellence, and this book's short length ensures that pretty much all of you have time to read it, which I highly recommend you do!
Update (11/30/2020): My rating is: Pretty good!