For #IMWAYR, I am recommending Faith: Taking Flight by Julie Murphy.

A word of caution to any young readers: this is a YA (young adult) book, not an MG (middle grade) book, and it contains somewhat mature content. 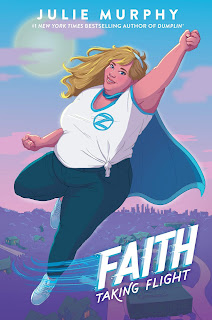 I'm a big fan of Julie Murphy—I loved her super-popular book Dumplin' and its sequel Puddin', and her book Ramona Blue was actually the first YA book I ever reviewed on this blog! Thus, I knew I wanted to read Faith: Taking Flight, even though it is part of a genre of books I almost never read: the superhero genre. Faith: Taking Flight is the first of two books that tell the origin story of Faith Herbert, a superhero who has existed in various comics series (including some starring her) published by Valiant Entertainment since 1992. Valiant made a deal with Murphy's publisher, HarperCollins, to have her write these prose novels about Faith, presumably to get her out to a wider audience who wouldn't normally read about this character in comics. (Like me, for instance; unlike many of my close relatives, I did not inherit the love-of-comics gene. At all.) Before I get started, let me be clear: you do NOT need to have any prior knowledge about Faith or any comics at all to read this book.

OK, now let's summarize. Faith Herbert is a senior in high school. Her parents died in a car crash several years prior (basically the only comics cliché this book doesn't avoid), so she lives with her Grandma Lou in the small town of Glenwood, Minnesota. Between her best friends Matt and Ches, her position on the school newspaper staff, her volunteering at the local animal shelter, and her realization that she can FLY (!!!), you wouldn't think Faith would have time for much else, but she crams in time to geek out over her favorite TV show, a long-running series called The Grove that her parents loved as well. When The Grove moves to Glenwood for filming, Faith meets one of the stars of the show, Dakota Ash, and their quickly-blossoming friendship veers close to romance (which is somewhat confusing for Faith, who already has a pretty strong crush on a fellow newspaper staff member named Johnny). Faith's life seems almost like a fairy tale, but when animals and people start vanishing from town without a trace just as a strange drug begins circulating around town, it just might fall to Faith, who's still trying to get a grasp on her superpowers, to figure out what's going on and save the day.

I am not a comics or superhero person, but I. Loved. This. Book. So. Much!!! First of all, I didn't quite know what to expect from this book, so I wrote up a recipe for you: add one cup of the positivity of Millie from Murphy's Dumplin' and Puddin' and one cup of the ability to face life head on of Ramona from Murphy's Ramona Blue, mix these into a Julie Murphy novel with all of its fun small-town charm and complex slice-of-life issues, then pour in a massive evil conspiracy, superpowers, and some ominous violin sound effects. Bake for 20 minutes until you have Faith: Taking Flight! The first half of this book is largely realistic slice-of-life stuff, with the superheroics coming in around the halfway point, which is a good half-and-half balance that should pull in Julie Murphy fans and comics fans alike.

I want to mention a few things I loved about this book. First of all, I am much like Faith with regards to my ability to geek out over things (*gestures at this review, then gestures at this blog post I wrote four years ago about my favorite TV show*), so I can completely relate to Faith's love for The Grove, as I suspect all readers can. Faith's love for The Grove has gotten her through hard times and acted as a connecting thread to her deceased parents (who were also mega-fans), and considering how my own favorite show is basically the only reason I am comfortable with who I am on a day-to-day basis, I can understand how she feels (and I imagine many readers will as well!). As someone who has connected to Murphy's own work enough to meet her in person at a book convention last year, it's sort of awesome to know that she gets how media (including that which she creates) can really affect readers and their emotions, hopefully for good.

Since her comics debut in 1992, Faith has been a fat superhero, but more than that, she has been a superhero who happens to be fat. Superheroes almost always perpetuate ridiculous body standards, so it's absolutely wonderful to see a character whose body does not define her, does not prevent her from being strong or attractive or heroic or anything! If every superhero was as nonchalantly body-positive as Faith, we'd be one huge step closer to eradicating body image issues for good! (Murphy strikes a great balance between occasionally bringing up this aspect of Faith and allowing it to fall to the background, which is especially good if you've read Dumplin' or Puddin' and worried that this book would just rehash ideas from those two, where body image is far more in the foreground.) Also, in this book, at least (I don't know about the comics), Faith is also attracted to people of different genders, which again is a pretty low-key topic in the book that just gets accepted. Dakota from The Grove and Faith's friend Ches are also attracted to various genders, and Faith's friend Matt is attracted to boys, so the book is overall just a wonderful example of representation for LGBTQIA+ people.

I quickly want to mention that the characters in Faith: Taking Flight are just wonderful! Faith is a truly layered, fabulous, super-realistic protagonist; Murphy manages to capture all of her conflicting feelings, all of her guilt and excitement and sorrow and kindness from the most minute to the most major, and it is amazing to watch. I also have to mention Dakota, the friend/love interest/The Grove star, who is incredibly multi-layered and who readers will care deeply about. And I have to give a shout-out to Grandma Lou, who is just a wonderful, loving person who shares Faith's ability to look life's pain right in the eye and face it, instead of pushing it deep down and denying it. Faith: Taking Flight also manages to cram in approximately 700,000 more topics that are all thoughtfully explored, from animal rights and third-wheel friendship feelings to dementia, grief (both on a small scale for loved ones and on a large scale for missing persons), and crime. I won't spoil these aspects, but they're something to behold.

Finally, I have to say that, for Murphy's first superhero story, she absolutely knocked that aspect out of the park! There's tons of thrilling action and honestly-creepy moments that almost send chills up your spine, there's a massive conspiracy that is fascinating to watch be explained, and there's Faith's own internal crisis about figuring out confusing new powers that might not even be enough for her to fix anything (flying and stopping crime are two very different things; otherwise, we'd see a lot more birds running the criminal justice system). (How can Faith's superpower-related feelings seem so real when there is literally no real-life example to base them on?) This book also steers away from many superhero clichés (such as creating an actual logic for the underlying crisis and conspiracy instead of just using the here's-some-magical-stones-that-could-destroy-half-(just-half)-of-the-world logic we see all too much).

All in all, Faith: Taking Flight is a truly amazing accomplishment. It is fun and uplifting, it is deep and thought-provoking, and it is thrilling and terrifying. Fans of Faith or of comics in general will love the care and superheroness that went into this book, and absolute haters of comics will love the realistic aspects and find themselves captivated by the action. Bravo to Julie Murphy for creating such a spectacular book—I'll be anxiously waiting for the sequel! (Although I think I can content myself with the third and final Dumplin' book, called Pumpkin—learn more here!)