I hope everyone is having a non-awful start to the week! (I feel like asking for a "great" start to the week is a bit unreasonable right now.) For MMGM and #IMWAYR, I am reviewing the graphic novel All Together Now by Hope Larson. 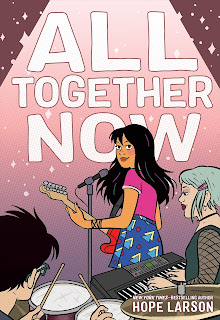 All Together Now is the sequel to All Summer Long, a graphic novel which I absolutely loved! I've been waiting for this book for a long time, and, unfortunately, its release date was pushed back from May to August because it is printed in China, which we all know was hit hard by the coronavirus. But now it's finally here, and I finally have a review of it!

The wonderful protagonist of All Summer Long, Bina, is also the protagonist of All Together Now. Bina (who loves writing songs and singing/playing guitar) has created her own band with a classmate named Darcy. The two of them are having a great time, until Darcy convinces Bina to let a third classmate named Enzo join as a drummer. Darcy and Enzo start dating, which strains Bina and Darcy's own friendship and puts the future of their band in jeopardy. And to make matters worse, Bina's friend Austin (who you'll recognize from All Summer Long) might have his own crush...on Bina! Bina isn't sure that she's ready to date someone (she's only in middle school, after all), so she'll have to figure out how to deal with Austin, her disintegrating band, and her friendship with Darcy while still pursuing her musical dreams.

Unfortunately, I had mixed feelings about All Together Now. Let's start with the positives. Just like in All Summer Long, Bina is an absolutely fabulous protagonist. She has more interests and goals than most adults: watching her research bands she loves, fall into a music-writing fervor, and brainstorm ideas for becoming a musician despite her young age really makes you wonder what you could have been doing in middle school besides worrying about friends and homework! Bina is the sort of person who makes anyone in close proximity to her (like readers) automatically feel cooler. As a reader, I was immediately on Bina's side, wanting her to succeed, and perhaps the best thing I can say about the prospects of the future third book in this series is that, if Bina is in it (which I'm sure she will be), then it can't be too bad!

Another positive of All Together Now is the art. Author/illustrator Hope Larson is an excellent artist, and her drawings shine in this book. She has a distinctive but not strange art style that conveys plenty of emotion but also a somewhat relaxed, almost-dreamlike air (although that may also stem from the monochrome mauve color scheme of the book). There are a few full-page spreads of Bina writing or performing songs (like on page 125 and pages 132-133) that are absolutely awesome, but every page is pleasing to look at.

This isn't a pro or con, but you might be thinking, "Middle schoolers can't possibly be dating now. Can they? But they're so young!" Indeed they are, but in my own personal experience at a K-12 school, some middle schoolers have in fact started dating each other (although usually just the ones who are, let's face it, attention-seeking, and it usually consists of holding hands, texting, and breaking up loudly and publicly). (You might now be thinking, "Aren't you judgmental today?" Yes. Yes I am.) I don't know if middle-school dating is as prominent as it is in All Together Now, where even kissing seems to be at least somewhat of a part of middle school life, but it could very well be! (I'd have to defer to kids at a more normal middle school for that info.) I do appreciate that this book tackles such a strange subject; it doesn't condone it, but it does show that it happens and needs to be dealt with by middle schoolers (although the characters here aren't exactly models of how to deal with it; there's a breakup that is basically the textbook example of how not to break up with someone).

Now for the cons of this book. In contrast to All Summer Long, which was packed to the gills with wonderful plot events and aspects, All Together Now's plot falls through your hands like water. If you were reading the plot description above and thinking, "That seems pretty sparse," it is. The entire subplot with Austin is so minor that it feels like it exists just so Austin can be in the book (since he was pretty important in All Summer Long). And the plot involving Darcy and Enzo is quite thin as well. We never really get to know Darcy, which made her pretty un-compelling, and we know even less about Enzo, which made him even less compelling. The lack of things happening didn't make the book boring, but that's because it went by so quickly—I read it in an hour, and I'm one of the slowest graphic novel readers you'll meet! Overall, I just didn't feel nearly as invested in this book as I did in All Summer Long. Also, I couldn't help but feel like the ending of this book put Bina in the same place she was in at the end of All Summer Long; you could probably skip from All Summer Long to book 3 (when it comes out) and be perfectly fine.

My sibling (who read this book as well) actually put it best: this book isn't a reason not to read All Summer Long, but it adds no real value to the series. I was going to think about if this book spoiled All Summer Long and thus if you could read it first, but honestly, why would you want to? All Summer Long is a fabulous graphic novel full of emotion and music and summer fun, but All Together Now is, except for Bina and her music, a pretty bland follow-up attempt. I will definitely be reading book 3 in this series, because All Summer Long was so good, and because it's very possible that a few too many plot events got pushed to book 3 and left All Together Now pretty vacant. And my recommendation of All Summer Long still stands, because it works pretty well as a standalone book; it could have ended with no sequels and still been quite satisfying. So here's my verdict: All Together Now isn't that great, but All Summer Long is still absolutely fabulous, and I recommend it completely—just know that you're not getting an excellent series of books, but an excellent standalone book.