For MMGM and #IMWAYR, I am wholeheartedly recommending the graphic novel Displacement by Kiku Hughes.

Although protagonist Kiku is a high schooler in this story, I believe this book is appropriate for MG readers and seems to be aimed at them (although YA readers will enjoy the book as well). 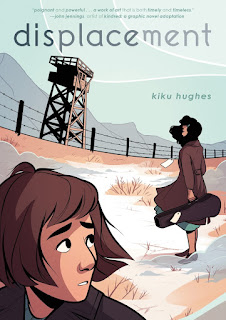 I discovered this book on a post by fellow #IMWAYRer Sierra Dertinger at Books. Iced Lattes. Blessed in which she rounds up books with wonderful covers (and indeed, this book's cover is just one of countless gorgeous illustrations throughout the pages). Displacement is based on the family history of author/illustrator Kiku Hughes, and Kiku herself is the protagonist of the story. In Displacement, Kiku, a girl of half-Japanese ancestry, is on a trip with her mother to San Francisco, grasping for small details about the life of her grandmother, Ernestina, who was one of about 120,000 people sent to incarceration camps during World War II. (I should mention that Hughes uses the term "incarceration camps" to more explicitly show the awfulness of these camps than if she uses "internment camps," and I'll be using that term as well.) Suddenly, Kiku finds herself "displaced" back to the time and place of the incarceration camps, where she is forced into the camps alongside Ernestina and many others. Kiku, like virtually everyone in the United States, never learned much about the camps, and with no ability to return to the present, she has no choice but to live life like the other 120,000 Japanese Americans in the camps. She sees freedoms taken away and lives virtually destroyed, but she also sees a community of people band together when they can to face the obstacles presented to them. And she just might learn more about how the camps have affected Japanese Americans to this day and how, despite current hateful rhetoric, she might have the ability to prevent such atrocities from happening again.

Wow. Honestly, this book is the next When Stars Are Scattered, and that is no small compliment. Considering that I discovered this book completely by accident, I was absolutely blown away by how stunning, heartbreaking, and insightful Displacement is. First of all, I think we can all agree by this point that all of the history we were taught in school was revisionist history, designed to cover up what actually happened (particularly when it paints the perfect United States in a bad light). I always recall history classes focusing far more on the Nazis rounding up Jews and murdering them than the Americans rounding up Japanese Americans and...well, mostly not murdering them, but still traumatizing them, upending or even destroying their lives, and even incinerating their culture and traditions, as I learned from Displacement. I've never read many books about war because I always thought they would be a pretty obvious recipe for sorrow, but as I've matured and gained the ability to deal with these topics (although, is it really an ability to feel sorrow less acutely?—food for thought), I've started reading books like Displacement and learning about things I was utterly clueless about.

Displacement does an excellent job of depicting exactly what happened in the incarceration camps. We see the way people were treated like numbers, like tasks on a to-do list; make sure this one isn't dead, make sure that one isn't dead, murder that one "accidentally" and cover it up, etc. We see the way Japanese Americans were faced with impossible decisions, like whether to swear loyalty to the United States (thus losing their Japanese citizenship even though the United States would not actually give them citizenship—they could end up legally allowed nowhere on earth) or not to swear loyalty and risk...everything. We see the way that the United States forced Japanese Americans to stop speaking their language, to stop feeling joy and thus stop celebrating their traditions, to basically let their culture die—and it worked. But we also see something else. We see people standing up for themselves, for their rights. We see people working tirelessly to make their sheds into homes, to invite others into their lives, to create a new life for themselves even if it could be torn away from them in a second. Just as we saw in When Stars Are Scattered, just as we saw in White Bird, just as we saw in Efrén Divided, we see the unbreakability of the human spirit. We see that, no matter how many times people try to destroy others through pain and torture, hope and joy will never die. Even if they don't win, they are still there, waiting to be discovered when the time is right.

Displacement is obviously not a memoir, what with the whole time-travel thing, but the protagonist is Kiku Hughes herself. Kiku is a thoughtful, brave protagonist who readers will absolutely root for and care about, but there's something else I want to zero in on about her. When we, as humans, think about traumatic events, we tell ourselves that they could never happen to us. No one will steal me from my family, because I'm not a minority. No one will put me in an incarceration camp, because our society is better now—that was just a one-time mistake. Someone will care about me enough to save me, because they have to. But the decision that Hughes makes, to place a character from the present, not the past, in an incarceration camp, strips all of those defenses away. Readers would never have expected Kiku, a character from 2016, to be stolen away to have her spirit broken (although, as she watched Donald Trump on TV in the story, ranting about starting a registry for Muslims [remember that?], she wasn't as doubtless as readers would have been). Seeing Kiku, a character safe in the present, subjected to the same horrors everyone else in the camps was subjected to, is an appropriately harsh reminder that all our ideas about why such atrocities would never happen again are meaningless. If we don't put in the effort to stop these horrors, who's to say that we, or the people we care about, won't be next?

Now, the speed round of other things I loved about Displacement. First of all, it's wonderful to see Kiku and her mother learn to discuss their culture and its past together, instead of keeping everything all bottled up inside. Next, I liked that Kiku develops romantic feelings for another girl in the story; it's not a main point of the story, but it's always nice to see even small bits of LGBTQIA+ representation that show readers who wouldn't normally seek out such topics that being LGBTQIA+ is normal. Next, the time-travel aspect of Displacement is actually a pretty important one in the story, and I really liked the explanation in the story for what exactly is going on. Next, as with White Bird, I appreciate the explicit calling out of Donald Trump; talking about intolerance without talking about its primary origin point is simply insincere. Finally, I am completely unable to draw, but if I was able to draw, I would want my art style to be like Kiku Hughes's. As you can see in the (blurry) book preview on this Amazon page, Displacement's art has satisfyingly crisp and clean lines, plenty of expression (both like in Raina Telgemeier's art), and particularly gorgeous colors (tranquil blue-greens, deep reds, dusty tans, etc.). Particular panels almost look like frames from a Pixar movie, which, in my eyes, is a compliment. The style is minimalist yet evocative, and I absolutely love it.

If you've read my reviews of the books I link above, you might think I sound like a broken record here. And, in some ways, I am. Displacement is just the latest of many fictional works that have substantially broadened my understanding of the real world, in ways that the books I used to tend to read did not. But Displacement also has its own value, its own merit, its own beauty in comparison to those books. Displacement does what graphic novels do best (but only if they can pull it off); it pulls you into a world, it sticks you in the protagonist's shoes, it forces you to see every facet of life and reality contained within its pages. You will learn from Displacement, you will see the beauty of Displacement, and, if you're anything like me, you will be reviewing Displacement on your own blog in a few weeks, saying exactly what I feel: "This book is so good!"