December 19, 2020
Do you ever sit down to write something, try to phrase it five different ways, and then give up and start complaining about it to the readers of your blog? No? Just me? Okay. I believe I'll start this post off with a lengthy series of random, disjointed, and irrelevant spiels:
Okay, I'm done! For MMGM and #IMWAYR, I am reviewing the graphic novel Pashmina by Nidhi Chanani.
I should mention that this book doesn't fit neatly into the MG (middle grade) genre (the main character, Priyanka Das, is actually in high school), but I felt that the general complexity of this book's plot and themes was more MG than YA (young adult), and that MG readers would probably enjoy this book more than YA readers would. 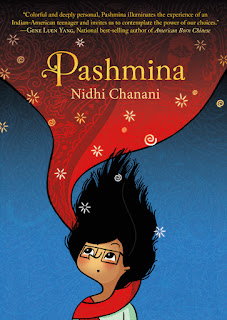 Pashmina's protagonist, Priyanka Das, is curious about what it was like for her mother to grow up and live in India before coming to America, but her mother won't tell her much. Priyanka also wants to know who her father is, but her mother won't tell her at all. Between her mother's silence, problems at school, and guilt about something she did, Priyanka is struggling. But when she opens her mother's old suitcase and puts on the pashmina kept inside of it, she is magically brought to what seems like India, where two magical animals show her the sights, sounds, and tastes of the country her mother won't discuss. But India isn't quite what it seems, and it becomes up to Priyanka to figure out the truth about India and her family.
I had mixed feelings about Pashmina, but I want to start by discussing its good aspects. It is really easy to think of countries we are unfamiliar with as terrible, unjust places or as beautiful, culturally rich places—honestly, I know I do this with the United States, and I actually live there! In contrast, Pashmina attempts to show both sides of India. We see the beauty and culture (beautiful palaces, gorgeous saris and other clothes, delicious foods like samosas) through Priyanka's "trips" via the pashmina, but we also see the injustices and poverty (people pulling other people along in carts like human taxis, kids in schools with rats running around) close-up through a certain plot-line that I won't spoil. Pashmina is also concerned with misogyny, as it showcases the struggles many women must undergo in order to simply exercise their right to free will. By showing so many varied female characters who deal with these challenges but are nevertheless strong and ready to fulfill their own needs, Pashmina creates a number of excellent role models for its readers.
Some more good things: I liked the way that Pashmina draws from Hinduism and its stories, particularly regarding the personified force known as Shakti; these aspects are not just sidelined, but are actually vital to the story. I also appreciated that Pashmina's main character, Priyanka, actually has interests (such as drawing comics and watching Bollywood movies) and isn't just a plot device. The story of Pashmina in general emphasizes closeness between family and friends; Priyanka's mother, despite keeping secrets from her, is a kind and loving woman, and Priyanka has a close relationship with an adult family friend. Finally, the art style of Pashmina is quite good, although it is nothing like you would expect from the cover; it is monochrome (except for a few scenes, most of which are in the magical land of the pashmina), and the art style is expressive and loose (it reminded me of Vera Brosgol's illustrations in Anya's Ghost and Be Prepared, which is a very good thing!). If you're curious what the art of this book looks like, click here and scroll down for a preview.
There are a number of issues with Pashmina, however. First of all, the scenes when Priyanka puts on the pashmina and explores "India" were supposed to seem fun and lighthearted, but they actually seemed somewhat creepy to me; I'm not an expert on fantasy novels, but I do know that intentionally using a magical object to go on adventures through an unfamiliar land with unfamiliar companions and a weird absence of people in the background until later in the scenes (which seemed accidental, not intentional) is not usually a good idea. And yet. Also, Priyanka's companions, an elephant named Kanta and a peacock named Mayur, keep some kind of secret from her regarding the potential evil nature of the magical version of India; later in the story, though, we find out that there was no evil whatsoever. So why did they keep everything secret in such a suspicious way? Another issue: Priyanka's mother is adamant that she will not let Priyanka do something (I won't say what), and then, mere pages later, she lets Priyanka do that very thing! None of these issues are major, but they do unfortunately add up and leave an impression on readers (or at least, this reader). I also want to say that I think it was a mistake to put Priyanka in high school when the complexity and emotions of this story align so closely with an MG book; I really don't think some throwaway moments of learning to drive or walking into a school with a sign labeled "High School" will pull in YA readers, so all they really do is potentially alienate the audience that would actually read this book.
I honestly can't tell you whether Pashmina is worth reading. This graphic novel is held back by several irritating issues and is missing that je ne sais quoi that really makes for a memorable story, but it is also short, it has interesting ideas about misogyny and the perception of foreign cultures, it has great art, and it has a relatively satisfying ending. You'll have to decide for yourself whether you want to read this book, but I think I can say this: if you know what you're getting with this book and you're pretty confident you want to read it (especially for free, such as via the library or OverDrive), you should go ahead and enjoy this book's good qualities! And if you don't want to read this book, I hope this post was entertaining to read, because that's all I can really offer!
(P.S. This is my second MG review in a row, as I am taking another break from YA reviews for a bit. [The break wouldn't actually have ended if Witchlight hadn't surprised me by being a YA book, not an MG book like I thought.] I hope to get back to YA reviews in a few weeks—with all of the YA books I put on my Christmas wishlist, my return to YA may be pretty soon!)
Update (2/6/2021): My rating for the graphic novel-averse is: 3!