December 12, 2020
I hope everyone is holding up OK as the winter holidays approach! (So...much...online...shopping...) I'd like to share a teensy bit of news before we get to today's review. A few days ago, Disney held their "Investor Day" when they basically announce all of the things and cause an Internet spectacle to prove to their investors how beloved they are, and although I was personally most excited by the new Disney and Pixar animated movies (just 454 days until Turning Red!), there are a few book-related adaptations coming soon! Flora & Ulysses, a movie based on the book by Kate DiCamillo, is coming to Disney+ on February 19 (it sounds like they have changed the plot somewhat, so I'll hope for the best, I suppose). They are also going to put a new Diary of a Wimpy Kid movie on Disney+ in 2021, this one animated instead of live-action. Finally, they reminded us that they had apparently already announced a show based on the Mysterious Benedict Society series, also coming to Disney+ in 2021, which personally sounds super-exciting!
Now on to the review! Apparently, there really is just an infinite number of delightful books, as I have yet another one to recommend to you all: the graphic novel Measuring Up, written by Lily LaMotte and illustrated by Ann Xu! 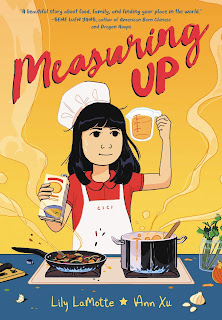