My mother and I went to do some shopping recently, mostly to find birthday gifts for a relative, and two things happened:

With that, today I am recommending yet another amazing book: Pet by Akwaeke Emezi.
This book is a YA (young adult) novel, not an MG (middle grade) novel, and it includes mature content. Also, I will include a content warning for strong allusions to physical or sexual abuse—nothing is graphic, but one thing I learned from reading Pet is that things do not have to be graphic to be horrifying.
Also, I am including an excerpt from the opening of the book at the very end of the review, and it is labeled so you can skip it if you are avoiding spoilers. 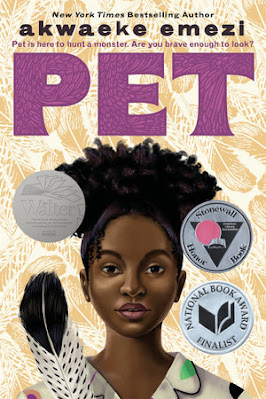