MMGM and #IMWAYR: This Is Our Rainbow: 16 Stories of Her, Him, Them, and Us, edited by Katherine Locke and Nicole Melleby

Before we get started, I hope everyone had a wonderful Thanksgiving—ours was very peaceful, and it was when I actually finished reading the book I'm reviewing today!

Also, I want to quickly mention an album of music I've been enjoying lately. Aimee Mann, who I first started listening to around 2 years ago, just debuted a new album called Queens of the Summer Hotel, and it is awesome! You can go read this interview to learn about it, but just know that it's brilliant and worth a listen (or several)! (And especially a listen in order, since the order really matters.)

Finally, I have the winners of the Holiday Picture Book Giveaway to announce! The first winner is...

Danielle will be receiving a copy of Eyes That Kiss in the Corners. The second winner is...

Carlo will be receiving a copy of A Map into the World. The third winner is...

Patricia will be receiving a copy of A Big Mooncake for Little Star. And the final winner is...

Jess (a fellow MMGM blogger at The Secret Files of Fairday Morrow)!

Jess will be receiving a copy of The Rabbit Listened. Thank you all so much to everyone who entered, and winners, I hope you enjoy your books! And if you did not enter, stay tuned for future giveaways.

OK! Now we can move into the review, and y'all, I am SO EXCITED to talk about this book: This Is Our Rainbow: 16 Stories of Her, Him, Them, and Us, edited by Katherine Locke and Nicole Melleby.

And I apologize that this post is so long—I cut the general blithering down substantially and dropped an entire mini-review, but I didn't have time to trim the other mini-reviews, so buckle in for a pretty long ride! 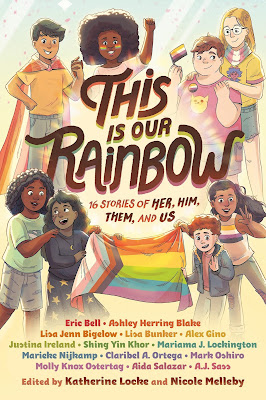 It's easy to think that LGBTQ+ individuals are a pretty small minority in this world. But the numbers are higher than you think—according to the Washington Post, about 1 in 6 adults in Generation Z identify as LGBTQ+, and according to to Newsweek, it's more than 1 in 3! And yet, for all of these budding LGBTQ+ individuals in the world, media representation is still moving sluggishly toward even having any LGBTQ+ characters at all, much less characters across the full spectrum of identities and experiences. And MG literature in particular has a problem with this—even as LGBTQ+ representation has become more and more common in YA literature, it's still pretty rare in MG books, although that is improving. People seem to have this idea that LGBTQ+ identities are "mature" topics that kids should get to when they're "ready," forgetting that (a) kids actually know who they are at any age, (b) gender identity isn't a mature topic at all, and (c) sexual orientation is only a mature topic when romance is a mature topic—and considering that crushes are practically the definition of the MG experience, it shouldn't be a shock that kids start considering their sexual orientation as soon as they find themselves having crushes on others of the same gender! And that brings us to today's book, This Is Our Rainbow, which helps fill a much-needed void for LGBTQ+ representation in MG stories!

So what is This Is Our Rainbow? It's a truly splendid collection of 16 short stories (including 1 in verse and 2 that are comics), all starring LGBTQ+ kids! This happens to be the third diverse anthology of short stories I've had the chance to read, following Once Upon an Eid (which was so good, it inspired me to try these other anthologies) and another anthology that I didn't finish because I unfortunately wasn't enjoying it. I was nervous after that anthology that I was maybe outgrowing these MG stories and wouldn't like this book either—but, lo and behold, This Is Our Rainbow was SPECTACULAR (possibly even better than Once Upon an Eid, although that's a tough call), with excellent story after excellent story after excellent story! Before I dive into some mini-reviews of my favorite stories, here's the publisher's description, which handily summarizes some of the stories AND lists off the extreme star power in this book (Lisa Bunker! Molly Knox Ostertag!):

A boyband fandom becomes a conduit to coming out. A former bully becomes a first-kiss prospect. One nonbinary kid searches for an inclusive athletic community after quitting gymnastics. Another nonbinary kid, who happens to be a pirate, makes a wish that comes true--but not how they thought it would. A tween girl navigates a crush on her friend's mom. A young witch turns herself into a puppy to win over a new neighbor. A trans girl empowers her online bestie to come out.

Intrigued yet? I sure hope so! Like with my review of Once Upon an Eid, I plan to discuss this book using mini-reviews of my favorite short stories. Let's dive in!

A "quick" note to end off on: if you read just one story about an LGBTQ+ individual, you would hear only from someone of *this* identity, or someone whose parents are *this* accepting, or someone who is able to be *this* out in their lives, or someone whose identity is *this* relevant to their story. But if you read the 16 different stories in This Is Our Rainbow, you get to see the diversity within the diversity, so to speak, as its protagonists navigate all different kinds of identities and circumstances, with their LGBTQ+ identities sometimes fading into the background almost completely and sometimes being a major topic. Like Once Upon an Eid, this book is a reminder that anthologies really can illustrate the diversity of experiences within a certain group far better than individual stories can. I wished for a bit more balance in the different LGBTQ+ identities represented (5 stories feature nonbinary protagonists, but only a single one features a transgender protagonist). But we do still get representation for pretty much everything, and with every single story being so meaningful and so well-written, This Is Our Rainbow cements itself not only as valuable representation for young readers, but also just as an extremely enjoyable collection of short stories that is absolutely worth a read!
My rating is: Stunning!