#IMWAYR: The Gentleman's Guide to Vice and Virtue by Mackenzi Lee

March 20, 2022
I had a wonderfully relaxing spring break this past week, during which I also got to visit a few friends, which was wonderful! Now it's back to college classes once again, but I feel like my priorities were reset a little bit—I'm hoping I'll be able to remember that my free time matters too! (He says, right before totally going back to his frantic, exhausting, boundary-free lifestyle...) I'm writing this post much later at night than I would like, so perhaps we're back to the same chaos. But at least I finished reading a book—that's a win in and of itself!
Anyway, before I get on with the post, I do want to mention that the winner of last week's giveaway of The Genius Under the Table by Eugene Yelchin is...
Donna (who is also a fellow blogger)!
Congratulations! And thanks so much to everyone who entered—I hope you all get a chance to try this wonderful book regardless!
Now for the post! Today, I'm recommending a wonderful YA novel: The Gentleman's Guide to Vice and Virtue by Mackenzi Lee.
By the way, this book is a young adult (YA) novel, not a middle grade (MG) novel, and it contains mature content.
Also, I will include a content warning for some physical abuse. 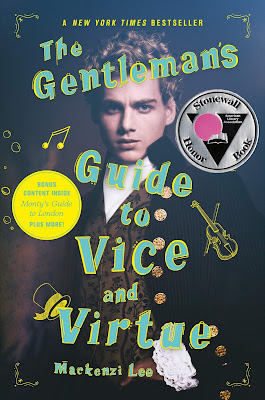