It feels like it's been two weeks since my last post! But I checked and nope, it's only been one. Anyway, for today's MMGM, I'm reviewing Ava and Pip, by Carol Weston. 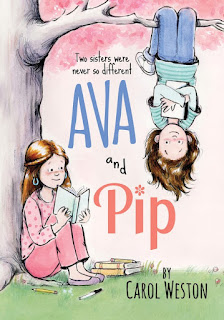 Meet outgoing Ava Wren, a fun fifth grader who tries not to lose patience with her shy big sister. When Pip's 13th birthday party turns into a disaster, Ava gets a story idea for a library contest.
But uh-oh, Ava should never have written "Sting of the Queen Bee." Can Ava and her new friend help Pip come out of her shell? And can Ava get out of the mess she has made?

I really enjoyed this book. It is depicted as Ava's diary, which is a nice change from the traditional first-person point of view. There are also two interesting ideas in the story that aren't in the description. The first is that Ava's family loves words (Ava enjoys writing), and the children's names were chosen because they are palindromes, or words that are the same if written backwards. Ava then notices many different palindromes throughout the story, which is a nice touch to the story. The second is that Ava also feels that her parents pay more attention to Pip than to her, which adds another struggle to the two shown in the publisher's description. The story that Ava writes, Sting of the Queen Bee, shows that Ava cares about her sister, and is an interesting way for her to gain a friend. Also, the book has two sequels, Ava and Taco Cat and Ava XOX. The sequels stand up to the high bar set by the first book. The book series has occasional (one or two) slight descriptions of puberty, if you're screening for a younger child. This book is a great read for anyone, young or old.

P.S. I will post articles on my blog during the week, but I probably won't have one every day. However, stay tuned! For instance, on Thursday, I have a poetry-themed surprise for you! Also, if you enjoy reading my blog, leave comments, answer the poll (for some reason, you may have to click Vote several times, so check to see if your vote is added), and subscribe via the "Follow by Email" widget, which will deliver new posts to your e-mail!
✨✨ Labels: Middle Grade Relatable Family Troubles