My feature today is for Ruby Goldberg's Bright Idea by Anna Humphrey, and illustrated by Vanessa Brantley Newton. 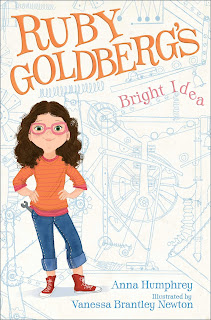 Ten-year-old Ruby Goldberg is determined to win her school science fair and beat her nemesis Dominic Robinson. She’s snagged second place for the last two years, and she’s set on claiming first prize. The only trouble is that Ruby has no ideas. When her grandfather’s beloved basset hound dies, Ruby thinks of the perfect thing that will cheer him up and win her first place—an innovative, state-of-the-art, not-to-be-duplicated Ruby Goldberg invention!

Before long Ruby is so busy working on her idea that she ignores everything else in her life, including her best friend, Penny. And what started out as simple turns into something much more complicated! Can Ruby get her priorities—and her project—in order before it’s too late?

This book is absolutely amazing! First of all, Ruby is a great character. She is likable and her interest in inventing is very fun to read about, but she's not without flaws and is easily distracted from everything else in her life. Her perspective on many things, such as her enemy, Dominic, changes a lot throughout the story. The death of Ruby's grandfather's dog, Tomato, is also important in the story, and changes her grandfather, a happy person, into a sad person in a realistic way. This book is a great read for anyone!
✨✨ Labels: Middle Grade