December 25, 2016
Update (August 11, 2021): I have removed a section at the beginning of this post.
Before the recommendation, I would like to show you just how many books I have gotten over the holidays (about 14.8125 inches tall): 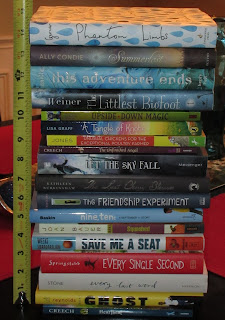 Finally, for MMGM, I am recommending Howard Wallace, P.I. by Casey Lyall. 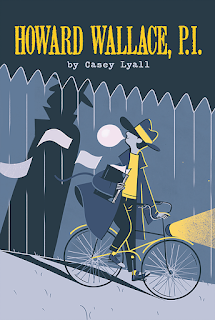 “What’s with the get-up? Is that the company uniform or something?”
“This? All P.I.s wear a trench coat.”
“Dude, that’s a brown bathrobe.”
I shrugged and straightened out my sleeves. “First rule of private investigation, Ivy: work with what you’ve got.”
Twelve-year-old Howard Wallace lives by his list of rules of private investigation. He knows more than anyone how to work with what he’s got: a bathrobe for a trench coat, a makeshift office behind the school equipment shed, and not much else—least of all, friends. So when a hot case of blackmail lands on his desk, he’s ready to take it on himself . . . until the new kid, Ivy Mason, convinces him to take her on as a junior partner. As they banter through stakeouts and narrow down their list of suspects, Howard starts to wonder if having Ivy as a sidekick—and a friend—is such a bad thing after all.
(Note: The text at the beginning that is in normal print was formerly italicized.)

This book is great! The main characters, Howard and Ivy, have many facets. Howard has a sarcastic, busy personality that hides the fact that he is friendless, while Ivy is happier and more impulsive, often doing things that Howard usually wouldn't. The mystery of who is behind the blackmail can be somewhat easy to predict, but there are several suspects until the actual mastermind is revealed. The book does a good job of making the villain not seem evil by giving her/him a rational (yet still wrong) motive. One nice touch of the book is Howard's list of "Rules of Private Investigation." These rules are often referenced and serve as part of a small conflict. Finally, the plot moves constantly, making the story always interesting. Howard Wallace, P.I. is a great book for everyone!
✨✨ Labels: Casey Lyall Intriguing Mysteries Middle Grade My Family Read-Alouds