January 01, 2017
Firstly, I am holding a New Year's Poetry Contest, where you can enter your own poem(s) about the new year (with reasonable restrictions) for the chance to win a prize! Click here to enter. Secondly, for MMGM, I am recommending Counting Thyme by Melanie Conklin. 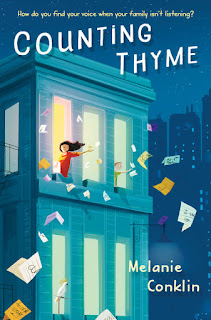 When eleven-year-old Thyme Owens’ little brother, Val, is accepted into a new cancer drug trial, it’s just the second chance that he needs. But it also means the Owens family has to move to New York, thousands of miles away from Thyme’s best friend and everything she knows and loves. The island of Manhattan doesn’t exactly inspire new beginnings, but Thyme tries to embrace the change for what it is: temporary.

After Val’s treatment shows real promise and Mr. Owens accepts a full-time position in the city, Thyme has to face the frightening possibility that the move to New York is permanent. Thyme loves her brother, and knows the trial could save his life—she’d give anything for him to be well—but she still wants to go home, although the guilt of not wanting to stay is agonizing. She finds herself even more mixed up when her heart feels the tug of new friends, a first crush, and even a crotchety neighbor and his sweet whistling bird. All Thyme can do is count the minutes, the hours, and days, and hope time can bring both a miracle for Val and a way back home.

With equal parts heart and humor, Melanie Conklin’s debut is a courageous and charming story of love and family—and what it means to be counted.

This is one of my favorite books! Firstly, although this book is mainly about Thyme's family's struggle with Val's cancer, the book is not overly depressing. It is, in fact, uplifting! However, it does have many conflicts, such as Thyme's guilt about wanting to leave New York (not helped by the fact that she has somewhat of a plan to return to California, at least for a short time). Thyme's school life is also enjoyable to read about, as she makes friends and deals with a fight between two classmates she has met. The book's characters have strong backstories and personalities, such as Mr. Lipinsky, Thyme's neighbor, who is often grouchy, mostly due to having lost his wife, but who later befriends Thyme. Although this book is sad at many times, it is happy enough to be a great read!

Since it is New Year's, I would like to thank everyone who has allowed this blog to prosper, such as my 5 e-mail subscribers (it may not seem like many, but having any subscribers is amazing!), those who comment on my posts (94 comments have been posted this year!), and those who write awesome books and poems that I can recommend!
✨✨ Labels: Middle Grade