July 07, 2017
For MMGM, I am recommending The Extraordinary Education of Nicholas Benedict by Trenton Lee Stewart. 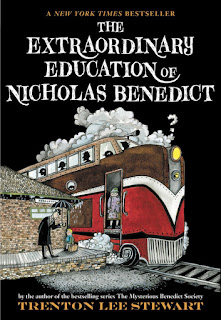 Before there was a Mysterious Benedict Society, there was simply a boy named Nicholas Benedict. Meet the boy who started it all....

Nine-year-old Nicholas Benedict has more problems than most children his age. Not only is he an orphan with an unfortunate nose, but also he has narcolepsy, a condition that gives him terrible nightmares and makes him fall asleep at the worst possible moments. Now he's sent to a new orphanage, where he encounters vicious bullies, selfish adults, strange circumstances -- and a mystery that could change his life forever. Luckily, he has one important thing in his favor: He's a genius.

On his quest to solve the mystery, Nicholas finds enemies around every corner, but also friends in unexpected places -- and discovers along the way that the greatest puzzle of all is himself.

As a fan of the Mysterious Benedict Society series (whose first book I recommended here), I was excited to read the series's prequel, and I'm glad I did — I liked it even more than the series, if that's possible! Just like with the main series, one of my favorite parts of The Extraordinary Education of Nicholas Benedict is the great writing, which is sometimes humorous, sometimes emotional, and always enjoyable. Nicholas, the main character, has both realistic flaws and many more good qualities, making him an extremely likable character. Two friends that he makes over the course of the book, John and Violet, are also very complex people, and even minor characters, such as some of the staff at the orphanage where Nicholas lives, have very realistic traits. The setting of the orphanage is well-described, and the plot is packed full of many different events, preventing the book from ever once becoming dull. Finally, the book tackles many interesting themes, such as bullying, family, and whether the world is actually as selfish as we think. This book is both a great insight into one of The Mysterious Benedict Society's best characters and just, overall, an extremely enjoyable read!