July 29, 2017
For MMGM, I am recommending Upside-Down Magic by Sarah Mlynowski, Lauren Myracle, and Emily Jenkins. 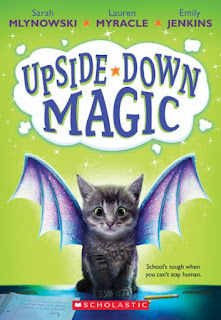 In a world of elite magic academies, weird and wonderful things happen when you're sent off to public school...and put in the Upside-Down Magic class.

It's never easy when your magic goes wonky.

For Nory, this means that instead of being able to turn into a dragon or a kitten, she turns into both of them at the same time-a dritten.

For Elliott, the simple act of conjuring fire from his fingertips turns into a fully frozen failure.

For Andres, wonky magic means he's always floating in the air, bouncing off the walls, or sitting on the ceiling.

For Bax, a bad moment of magic will turn him into a . . . actually, he'd rather not talk about that.

Nory, Elliott, Andres, and Bax are just four of the students in Dunwiddle Magic School's Upside-Down Magic class. In their classroom, lessons are unconventional, students are unpredictable, and magic has a tendency to turn wonky at the worst possible moments. Because it's always amazing, the trouble a little wonky magic can cause . . .

I really enjoyed this book, seeing as how I read it in 2 days (although it is short) and have already started the first sequel (book 4 will come out this January)! The main character of the book is Nory, a girl who lives in a world where everyone has some sort of magic powers. Nory's powers, like those of many others in the book, allow her to turn into different animals, but, unlike the powers of others, these animals are usually not one animal, but a blend (such as the dragon-kitten combination, or "dritten," shown on the cover). In addition, Nory often loses control over her animal forms to pure instinct. For these reasons, Nory does not get into the private magic school run by her father, who sends her away from her family to live with her aunt and go to a public school. During the course of the book, Nory struggles with being away from her family and having trouble in her class, but she also starts to like her aunt, teacher, and classmates and learns that her powers, despite being judged and ridiculed by many, can actually be useful. All of the characters in Upside-Down Magic are fully fleshed-out (even the bullies), and the plot never drags on, instead moving quickly thanks to the book's short size. Although this book is aimed at 5th or 6th graders, who will definitely enjoy it, older readers will still love the messages and characters and want to try the sequels A.S.A.P.!
✨✨ Labels: Lauren Myracle Middle Grade