July 20, 2017
For MMGM, I am recommending the Wells & Wong Mystery series (Murder Is Bad Manners, Poison Is Not Polite, and First Class Murder) by Robin Stevens. 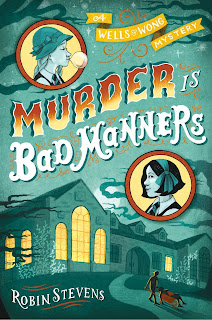 (Note: The cover shown is for Murder Is Bad Manners.)

Here's the publisher's description for the first book in the series, Murder Is Bad Manners:

Daisy Wells and Hazel Wong are best friends at Deepdean School for Girls, and they both have a penchant for solving mysteries. In fact, outspoken Daisy is a self-described Sherlock Holmes, and she appoints wallflower Hazel as her own personal Watson when they form their own (secret!) detective agency. The only problem? They have nothing to investigate.

But that changes once Hazel discovers the body of their science teacher, Miss Bell—and the body subsequently disappears. She and Daisy are certain a murder must have taken place, and they can think of more than one person with a motive.

Determined to get to the bottom of the crime—and to prove that it happened—before the killer strikes again, Hazel and Daisy must hunt for evidence, spy on their suspects, and use all the cunning, scheming, and intuition they can muster. But will they succeed? And can their friendship stand the test?


Some books are meant to be digested slowly and carefully, while others are designed to pull the reader through at lightning-speed and get them interested. Murder Is Bad Manners and its sequels fall into the latter category. This series (which I heard about from fellow MMGMers Michael Gettel-Gilmartin and Sue Kooky) combines a well-thought-out, intriguing murder mystery with the story of two very-different best friends in 1930s Great Britain. One of the best parts of this series is the characters. The two main characters are Daisy Wells, a popular girl at her boarding school who secretly decides to become a detective, and Hazel Wong (the narrator), a girl from Hong Kong who is befriended by Daisy and dragged into being her assistant. Daisy and Hazel have very different personalities (Daisy is impulsive, while Hazel is thoughtful) and sometimes fight, but this only adds to making their friendship seem very realistic. Both characters have their own struggles, such as family relationships and, in Hazel's case, standing out because of race, and these are well-illustrated in the series, especially the later books. Another part of the series that I love is each mystery. Filled with clues, twists, and both relevant and irrelevant secrets, the mysteries will grab the attention of any reader and leave them both shocked and pleased at the end. The series uses just the right amount of foreshadowing, making it challenging, but possible, to guess the ending. Finally, the victims and suspects are very realistic and compelling as well. The books in the Wells & Wong Mystery series will be enjoyed by both child and adult alike, with just the right balance of real-world elements and dramatic mystery.
Note: The books in the Wells & Wong Mystery series were originally published by Penguin Random House in the United Kingdom, where it is known as the Murder Most Unladylike series. The books were then republished in the United States by Simon & Schuster. Book 4 (Jolly Foul Play) has been released in the U.K., and it will be released in the U.S. in April. Book 5 (Mistletoe and Murder) has been released in the U.K., but U.S. publication has not been announced. The same has occurred for the short story compilation Cream Buns and Crime (which contains the Deepdean Mini-Mysteries shown on Robin Stevens's website), and will most likely occur again for the untitled, but announced, book 6. A list of books is available on Robin Stevens's website, robin-stevens.co.uk.
Labels: Intriguing Mysteries Middle Grade Perfect for History Lovers