April 25, 2020
For #IMWAYR, I am recommending Dear Haiti, Love Alaine by Maika Moulite and Maritza Moulite. 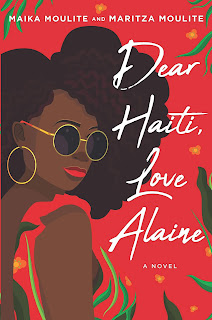 Alaine Beauparlant doesn't have an average family. Her mother, Celeste Beauparlant, is a journalist who hosts a widely-watched TV news program called Sunday Politicos (and is an immigrant from Haiti), and Celeste's twin sister Estelle is the Minister of Tourism for Haiti and founder of PATRON PAL, an app that allows people to donate to help specific children in Haiti and see exactly how they benefit from the money. Alaine's outgoing, fiery nature (like that of her mother and aunt) will likely benefit her later in life, but as a teenager in private school, it is the catalyst for what my copy's front flap calls "the incident." "The incident" results in Alaine's school agreeing for her to spend the rest of the school year in Haiti (her first visit) volunteering with PATRON PAL, as well as getting to see her mother, who is taking time off from her hyper-busy lifestyle after her own dramatic incident and a shocking health diagnosis. On her trip, Alaine gets swept up in Haitian history, time with her usually-absent mother, the beginnings of a possible romance, and plenty of family drama (including a possible curse). Written in epistolary form (a word I just learned but will pretend to use as if I am quite familiar with it), Dear Haiti, Love Alaine shows Alaine's journey of joy, sorrow, and growth as she embarks on the trip of a lifetime.
I really enjoyed this book! Two aspects of Dear Haiti, Love Alaine make it a truly unique read: the format and Alaine herself. Most of the book is told in entries from Alaine's diary, all of which showcase her unique personality: she is afraid of almost nothing, ready to speak her mind, and snarky yet thoughtful. Alaine's diary entries have sarcasm, strikethroughs, and the occasional slang word that you won't understand at all. Occasionally, the story switches from diary entries to text messages, emails, lists, and more, and these are often even more humorous: one of the most climactic scenes in the book is told as a recipe. (Yes, a recipe.) There are times when Alaine's unique personality seems a touch unrealistic, but it overall (along with the format) makes this book truly fun to read.
Dear Haiti, Love Alaine also has a truly interesting story. Barring the unrealistic setup (I'm unsure how Alaine volunteering with her aunt for several months qualifies as punishment), Alaine's trip sets up a variety of truly interesting plot points. Readers get to see a vivid look at Haiti as Alaine visits historic locations and tourist destinations, and the book also highlights the divide in Haiti between the wealthy families (such as Alaine's own) and the poorer residents (a divide especially accentuated by Alaine's and Estelle's work with PATRON PAL). This divide becomes especially important later in the book, although I won't say why—you'll have to read the book to find out! Also, the book draws from the history of Haiti's fight for independence to set up the possible curse I mentioned earlier; the authors explain in the author's note that the history in the book doesn't exactly match real life, but instead creates a sort of "What if...?" alternate history, which is still fascinating to read and learn about! Lastly, I want to mention that Dear Haiti, Love Alaine impressively deals with Alaine's pain/denial/other feelings about her mother's diagnosis; with most books, these feelings would become the core of the novel and turn it into a depressing read, but with this book, they are just one of many story elements and never make the story too dour.
I don't love everything about Dear Haiti, Love Alaine. The first half of the book is an extremely fast read but doesn't have quite as much plot movement as it needs; I thought I was still at the beginning at the book when I checked and realized I was a little over halfway! There are also a few sentences in the book that literally make no sense; I could not make heads or tails of what they were saying! Also, I have to point out that there should be a comma between Love and Alaine in the title—that bugs me to no end! Despite the flaws, however, Dear Haiti, Love Alaine is a truly excellent read that tackles a number of interesting topics and ideas through the unique lens of its narrator and format! I recommend this book to everyone!

(P.S. This book was written by two sisters, and I honestly think it's amazing that two siblings wrote a book together without arguing each other to death—I feel like that's what would have happened if I wrote a book with a sibling!)
Update (1/2/2021): My rating is: Pretty good!