April 11, 2020
For #IMWAYR, I am recommending the graphic novel Pumpkinheads by Rainbow Rowell and Faith Erin Hicks.

This book is a YA (young adult) novel, not an MG (middle grade) novel, but it doesn't contain any mature content and is probably safe for younger readers to read. 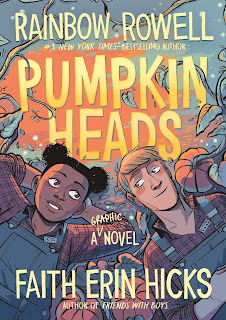 I realize that the middle of spring isn't the most reasonable time to be reading a book set on Halloween, but too late! For most of us, Halloween is a semi-fun holiday that comes once a year, but for Deja and Josiah (who also goes by Josie), Halloween is the last day they'll spend working together at the wonderful pumpkin patch where they've worked each year of high school (and probably the last time they'll ever see each other, since they aren't friends outside of the patch). Josiah is ready to spend this last day exactly as he always does: working at a booth with Deja, serving succotash and talking about Marcy (a girl who works there who he has a crush on but has never spoken to). Deja, however, is determined to get Josiah to finally talk to Marcy (and to grab as many delicious foods as possible while she's at it). Set (and, at least for me, read) over the course of a few hours, Pumpkinheads chronicles Deja and Josiah's journey through the place they love in beautiful graphic novel form.
I absolutely adored this book! In keeping with last week's post about great MG books to read during all this, Pumpkinheads is a joyful, fast-paced read that has some wonderful lessons to impart and a vivid setting to share. Before I get into anything else, the setting of this book is truly wonderful. When I think of a pumpkin patch, I usually think of some pumpkins set out on a field and some people running admissions, but the pumpkin patch in Pumpkinheads has rides, a corn maze, and booths selling some absolutely wonderful-sounding foods. (One food in the book, the Pumpkin Bomb, is two slices of pumpkin pie with vanilla ice cream between them, all on a stick and dipped in chocolate. I need this!) Faith Erin Hicks's detailed and expressive illustrations (you can see some of them here) and colorist Sarah Stern's excellent color choices make for a world that you'll want to jump right into.
Pumpkinheads isn't style without substance, however. Deja and Josiah are two vividly-written, well-developed characters who you'll love without reservation. Josiah is determined to do his job well (he's been chosen as Most Valuable Pumpkin Patch Person, or MVPPP, four times) but is far less determined to reach out to other people; even his friendship with Deja is the result of Deja reaching out first. Deja, in contrast, is outgoing and has many friends (both at the pumpkin patch and elsewhere), but she's also extremely caring: she wants the best for Josiah and is determined to help him get there (although not without having plenty of fun of her own). Pumpkinheads brings up interesting points about first impressions, reaching out to others, and staying friends even while separated, and I definitely found quite a bit of my own life and experiences mirrored in the story.
Pumpkinheads also benefits from a fun, well-paced plot that, in 212 pages, moves quickly but never feels like too little time spent with such a great story! It's also quietly diverse, from a background character in a wheelchair to Deja herself, who has dated both boys and girls; it's always nice to see a book that normalizes diversity without making too big a deal of it! All in all, Pumpkinheads is a truly delightful and heartwarming read that can be read and adored in any season—take my word for it!
(One last thing: my paperback copy of Pumpkinheads has a conversation between Rainbow Rowell and Faith Erin Hicks in the back of the book, and one tidbit I found interesting was how they divided up the work: Rowell wrote a script of plot events and dialogue, but Hicks was free to decide how it should be split up into panels and what should be drawn in each. This collaborative approach resulted in a book that excels in dialogue and plot as well as illustrations and design!)
Update (1/2/2021): My rating is: Really good!