April 05, 2020
As the coronavirus leaves us stuck at home, panicked and stir-crazy, I've gone through my past reviews to find the perfect MG books for you all to read right now! Below are descriptions of 6 books and explanations of why you should read them right now. Let's dive in!

The Candymakers by Wendy Mass
See my review

The Candymakers is a perfect choice right now for a few reasons. First off, the book is about four kids (Logan, Miles, Daisy, and Philip) who are competing in a contest (held at a candy factory) to create the best candy—what could be more fun than that? But there's so much more to this book. You may be as tired of multiple-POV books as I am, but The Candymakers is different. Instead of switching back-and-forth between perspectives, The Candymakers goes through its story (up to a cliffhanger) from just one character's perspective before switching to the next. This scheme acts as the perfect vehicle to explore people's perceptions of others: each of the four main characters has a secret, and seeing the characters both through their own eyes and through the eyes of others is a fascinating look into how we look at other people vs. how they think of themselves. Plus, between waiting to learn each character's secret and wanting to know how the contest ends, your interest will be so piqued that you'll race through this book!

The Boy on the Porch by Sharon Creech
See my review

You might know Sharon Creech for her Newbery-winning and not-exactly-uplifting book Walk Two Moons (which has three deaths!), but she actually tends to write uplifting, heartwarming books (which we need right now). The Boy on the Porch falls in the latter category. Unlike most MG books, which revolve around a child and have parents as supporting characters, The Boy on the Porch revolves around a couple, John and Marta, who take in a mute boy named Jacob after finding him on their porch. Despite never having raised a child (and thus having quite a bit of doubt and confusion), and despite Jacob never speaking, the three characters form a strong bond that Creech (being a Newbery winner and all) depicts beautifully. Although I am not a parent, I anticipate parents will relate well to the story of a couple figuring out how to raise a child, and the book's extremely-short length and suitability for readers of all ages would make it great for a family read-aloud! (Also, if you like this book, I also enjoyed Creech's books Heartbeat and The Unfinished Angel.) 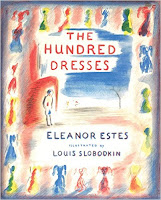 The Hundred Dresses by Eleanor Estes, with illustrations by Louis Slobodkin
See my review

Also suitable for readers young and old, The Hundred Dresses is as enjoyable to read now as it was 75 years ago (when it was published). Proof that bullying is not new, The Hundred Dresses is centered around Wanda Petronski, a young girl who wears the same dress to school every day but says that she has a hundred dresses at home. Some of her classmates (such as a girl named Peggy) do not believe her and make fun of her, and others (such as Peggy's friend Maddie) don't stand up for her. When Wanda's family pulls her out of the school, her classmates discover what Wanda actually meant, and Maddie ultimately realizes that she needs to do more in the future than be a bystander to bullying. It's hard to explain why you should read this book right now, considering its sad topic. Perhaps Wanda's ability to remain kind, even to those who treat her badly, is something we need to see in today's bitter world. Perhaps the warmly colored illustrations will make you feel better. Or perhaps it's the ending, which is heartbreaking and heartwarming; it reminds you that good people still exist in the world and that change occurs slowly but is still possible. This book is extremely short (it straddles the line between picture book and chapter book, but with MG topics) and was a Newbery Honor, so it is a quick yet fulfilling read!

The Phantom Tollbooth by Norton Juster, with illustrations by Jules Feiffer
See my review

Also an old book, The Phantom Tollbooth is truly a delightful read! The book revolves around a boy named Milo who is bored with everything (I'm sure we all can relate right now). One day, a tollbooth pops up in Milo's room, and when he drives through it in a toy car, he is caught up in a wild adventure through lands of facts and puns (see the cover, where Milo is seen with a "watchdog" named Tock). This book is fun from cover to cover! Milo journeys through a world of words and a world of numbers, meets truly strange and amusing characters (such as the twelve-sided Dodecahedron and the awful DYNNE, who loves terrible sounds), and encounters countless jokes and idioms (in one place, where people eat their words, Milo asks for a light meal and is presented with a literal ray of light to eat). If you love jokes, facts, and fun books unlike anything else, definitely read The Phantom Tollbooth!

I realize I already recommended a book by Wendy Mass, but it's not my fault that her books are fun and uplifting yet deep and thought-provoking! Indeed, Mass is the only author who could discuss the meaning of life from the perspective of a boy whose father died in a car crash without depressing readers (which is exactly what she does in this book). Jeremy Fink's father left him a box and a note telling him that the meaning of life is in the box. However, the box has several keyholes, yet Jeremy has only one key. Jeremy and his best friend Lizzy are determined to open the box, but their quest seems to be derailed when they have to complete community service for the owner of an antique shop. As they travel across town, returning items to the people who originally sold them, they discover that they might be closer to discovering the meaning of life than they think. With main characters you'll root for and ideas about the meaning of life that I think are actually true, this book is a fun and uplifting must-read!

I didn't intend for car crashes to become a recurring theme of a post about uplifting books, but here we are. Lucky Broken Girl is a novel based on author Ruth Behar's own experience of moving to New York City from Cuba with her family as a young girl. Main character Ruthie Mizrahi is getting used to speaking English and playing hopscotch with neighborhood friends when she is severely injured in a car accident, leaving her bedridden and in a full-body cast for months (this actually happened to the author). Putting an uplifting spin on such an incident is a challenge, but Behar pulls it off. Friends, family, medical staff, and neighbors all help Ruthie through being bedridden, and Ruthie also takes the time to type up her own stories and draw. Lucky Broken Girl is a beautiful example of a community coming together to help someone else in a time of tragedy. In one moving scene later in the book that Behar mentions on her blog, Ruthie's neighbor Chicho walks her through a tango dance to help her feel more confident about moving around physically. The book is also a beautiful example of a girl whose inner strength and perseverance help her overcome her struggles and make the best of an awful situation—despite missing school, rarely seeing friends, and struggling to re-learn to walk, Ruthie pushes forward. Perhaps the most inspiring part is that the real Ruth Behar did the same and told the tale as this very novel! I saved Lucky Broken Girl for last because, in the same way that our world will come out of this tragic time strong and well, Ruthie (with the help of those around her) comes out of her own tragic time strong and well.

I hope you enjoy these picks! If you have any suggestions of your own (or comments about the current times in general), leave them in the comments below!
✨✨ Labels: Middle Grade