May 09, 2020
For #IMWAYR, I am recommending Will Grayson, Will Grayson by John Green and David Levithan. 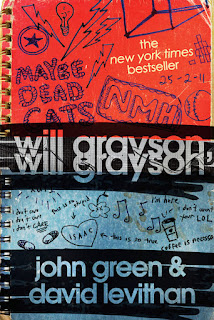 Nothing says "behind on my reading" like reading a book from 2010 and discovering mentions of flip phones and instant messaging. In every other way, though, this book's story is timeless and perhaps even more relevant today than it was then. Will Grayson, Will Grayson alternates between two points of view: that of Will Grayson, and that of Will Grayson. The first Will Grayson survives high school through apathy and distance, in sharp contrast to his gay best friend, Tiny Cooper, who is so dramatic that he is attempting to put on a musical about his own life at his and Will's high school. As Will deals with being in his friend's shadow as well as the struggles of high school romance, the second Will Grayson is dealing with his chronic depression and classmates he isn't exactly close to. The only thing that brings him joy is the budding friendship/romance via IM with a boy named Isaac. One day, while "out on the town," so to speak, the two Will Graysons meet, thus spurring a series of events that changes both boys' viewpoints on life (and culminates at Tiny's memorable musical).

I knew one thing after reading this book: it would make for an extremely interesting review! There's a lot that I loved about this book, and I knew that the few things I didn't love would be interesting to discuss. First of all, let's talk about the things I did love. Green (who writes the first Will Grayson's chapters) and Levithan (who writes the second Will Grayson's chapters) imbue both Wills with excellent voices and character development. The Wills and their struggles have been hardened by the stresses of high school, leaving them both able to at least see their problems and comment wryly about them. This book is darkly, deadpan-ly hilarious on pretty much every page, and this humor both makes the book fun to read and occasionally jarring, considering how the characters' struggles don't seem like ones I would be joking about if I had to deal with them.

Looking at some of these struggles more closely, the first Will deals with the immense contrast between him and Tiny, which starts to stretch their friendship quite thin. It is fascinating to see how Will and Tiny's relationship is built, at least in part, on them both thinking the other is somewhat ridiculous (not exactly the most healthy foundation). Will's romantic struggles are pretty par for the course and not hugely original, but his love interest Jane is a likable character who shares a love of music with Will (you'll definitely learn about bands you've never heard of while reading this book). The second Will Grayson's struggles with depression are also well-developed; although dulled by medication and time, Will still deals with feelings of inferiority and shame. This Will's journey through these feelings is fascinating as well, although I won't go into it for fear of spoiling too much. Finally, I have to mention how excellent Tiny is as a supporting character: it's fascinating to see a character who is so important to the story of a multiple-POV book not have his own POV, but through the lens of the two protagonists and through his truly entertaining musical, you will learn quite a bit about this fascinating character. (I am glad that this is not one of those books that skips the play/musical/show at the end, although it doesn't illustrate it verbatim—that is the job of this companion book, which features the script of the musical in its entirety! Trust me, you'll want to read it by the end.)

Now, I want to mention some of the things I didn't love. First off, I found both main characters having the same name to be, if not unnecessary, at least underutilized in the story. Realistically, the stories of both Wills are largely separate—their meeting did not turn them into best friends or even good acquaintances. The problem, though, is that the separation of the stories means that the characters could have had different names, and the story would probably have worked just as well. I also want to mention the book's pacing, which is populated pretty sparsely with plot events—I found it problematic that the meeting of the two Will Graysons (the catalyst for the plot) does not happen until page 109! If you're a fast reader, the pacing likely won't bother you, but if you aren't, you might get somewhat bored at times.

Overall, Will Grayson, Will Grayson does not have the most eventful plot, but its well-developed characters, immense humor, and realistic resolutions to problems many teens struggle with carry the book to greatness. If you enjoy savoring every well-written word of a book (or if you don't but you can just read quickly), you will find an enjoyable and utterly unique read in Will Grayson, Will Grayson!
Update (1/2/2021): My rating is: Pretty good!