May 30, 2020
For MMGM and #IMWAYR, I am recommending Becoming Brianna by Terri Libenson. 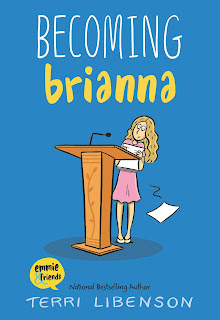 Becoming Brianna is the fourth book in Terri Libenson's graphic novel series "Emmie & Friends"—the first three books are Invisible Emmie, Positively Izzy, and Just Jaime (reviews linked), and a related journal (that's been a trend lately) called YOU-Niquely You is coming out soon. (There will also be a 5th regular book in the series.)
Becoming Brianna is centered around—you guessed it—Brianna, Emmie's best friend and a recurring character throughout the series (acting as one of two protagonists in Positively Izzy). Brianna is a smart middle-schooler who, while not shy, certainly doesn't want all eyes on her. Brianna faced her fear of attention when she performed in the school talent show in Positively Izzy, and she faces it again in this book at her bat mitzvah. Brianna can't figure out why she agreed to have a bat mitzvah in the first place, except to please her mother, and she isn't looking forward to it. She has to learn to speak and pronounce Hebrew prayers and a passage from the Torah, and she has to give a speech that she's having trouble writing. She's also dealing with more stage fright and worrying about whether she even believes in Judaism in the first place—and new friends of both her and Emmie are threatening to upset the balance of her and Emmie's friendship. In Becoming Brianna, readers get to see Brianna overcome her stage fright, juggle confusing friendships, and figure out what her bat mitzvah really means to her.

Finding a great book series is sometimes even better than finding a great book, because there's a familiarity in the various sequels that gives you something to expect and find comfort in. Like all of the books in the "Emmie & Friends" series, Becoming Brianna alternates between chapters of prose with frequent comic-esque illustrations and chapters of full-on comic panels (which makes this book familiar to both frequent prose readers and frequent graphic novel readers), and, also like all of the books in the series, there's a twist at the end (although the twist is definitely not as impressive as it was in Invisible Emmie and Positively Izzy). Current readers of the series will take comfort both in the familiar format of the story and in the connection of this book to events in the previous books. However, like a poet sharing new ideas within the constraints of, say, fourteen lines of iambic pentameter, Libenson uses the format of her book series to explore new and unique topics each time.

This is one of just two books I can think of that deals with bar/bat mitzvahs (the other is About the B'nai Bagels by the incomparable E. L. Konigsburg)—this astounds me, considering how important these ceremonies are in the Jewish community (and I would know, considering that I had a [low-key] one when I was young). It was excellent just to see discussion of bar/bat mitzvahs being brought to a wider audience, but what I appreciated even more was seeing Brianna's struggles as a non-religious kid to figure out why exactly she was participating. I suspect that a lot of kids today have found themselves in a similar position as Brianna, reading and thinking about religious beliefs/rules/stories without actually believing in them, but it was great to see how Brianna still managed to find meaning in the ceremony and in Judaism in general. I particularly liked one point in the story where Brianna discusses/argues about one of the Jewish stories with her rabbi instead of listening without complaint or not contemplating it at all. (Also, FYI: there's a short glossary in the back of the book if you're unfamiliar with some of the words and mechanics being discussed, although they largely get explained within the story.)

Some other thoughts: first of all, I loved the way this book dealt with Brianna being pushed into holding a bat mitzvah by her mother: Brianna's mother has to work through some of her own feelings related to coordinating the bat mitzvah and to having been the first woman in her family to have one. The discussion of Brianna and Emmie's struggles at branching out into multiple friends are well-done, and I particularly appreciate how some of them have originated in previous books—it's nice to see characters still grappling with tough feelings instead of everything getting wrapped up tidily at the end of a book. Libenson also imbues this book (and the other books in the series, for that matter) with plenty of humor; she has a knack for noticing random details and commenting on them with amusing captions (great examples are in the excerpt at the bottom of this page), and there's also plenty of visual gags (at one point, Brianna goes outside to think and says "Even my brain needs some air," with a drawing beneath it of a brain clipped to a clothesline alongside some T-shirts and shorts).

All in all, Becoming Brianna is an excellent addition to the "Emmie & Friends" series. It deals with several fascinating topics (and an under-discussed culture) while also being quite fun to read, and it stands out from the near-endless selection of MG graphic novels available today. I do recommend that you at least read Positively Izzy before this book (which spoils some of that book's secrets), but rest assured that many of the great elements of this book are hallmarks of the whole series—looks like you've got some reading to do!
Update (1/2/2021): My rating is: Really good!