May 03, 2020
Hello, everyone! Before I get to today's review, I wanted to mention that I hope everyone is healthy and (relatively) happy as we move into what seems like week #627 of the coronavirus. If you're feeling like you're the only person stressed out right now, some bloggers have posted some really relatable content: two standouts are Joanne Fritz at My Brain on Books, who has been documenting her experience weekly with a pandemic diary, and Elisabeth Ellington at The Dirigible Plum, who posted an excellent poem about the coronavirus as part of her now-concluded series of daily poetry for the month of April.

Now, let's get to the review! Today, I am reviewing White Bird: A Wonder Story by R.J. Palacio. 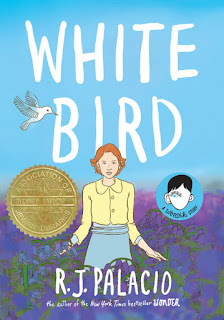 I decided to read this book after seeing an excellent review of it on Sierra Dertinger's wonderful blog, Books. Iced Lattes. Blessed.—I was not disappointed! First, some backstory: White Bird is a graphic novel companion to Wonder, R.J. Palacio's exorbitantly popular 2012 MG novel about a boy named August whose unusual facial features (due to a genetic disorder) bring out the worst and the best in the people around him. (I should mention that I read Wonder before I started this blog and loved it, even though I never reviewed it.) Because Wonder was so successful, Palacio continued writing companion books and short stories to Wonder (most of which I have not read), but they have all been in prose—until now. White Bird marks Palacio's graphic novel debut, and it's worth pointing out that, unlike some of the prose authors who have worked with illustrators to make graphic novels, Palacio illustrated this book herself (her website says that she designed thousands of book covers before she wrote Wonder, so I suspect those artistic skills came in handy). You don't need to have read Wonder or its companion stories to understand and enjoy White Bird.

If you've read Wonder, you probably remember Julian, the main bully of the story (and if you've read The Julian Chapter that Palacio wrote later, you know more about him than I do!). White Bird is narrated by Julian's grandmother (or Grandmère), Sara, as she tells a now-changed Julian the story of her childhood during World War II. Sara (who is Jewish) lives a happy life with two loving (and well-off) parents and several good friends at school. But everything goes wrong when the Nazis occupy France. The Nazis come to take the Jews from Sara's school, and she is one of the only people who escapes. But her parents are gone and she is still wanted, and it is only for the kindness of Julien (with an e, not an a), a classmate on crutches who Sara is not the nicest to (and her grandson's namesake), that Sara is able to stay safe.

You might be thinking that this is not the sort of story usually told as a graphic novel—and you'd be right. However, the graphic novel format works extremely well for White Bird. Many readers of today know something (I hope) about World War II and the Holocaust, but I suspect much of that knowledge is abstract. White Bird actually shows readers what happened during that time. You see characters running from the Nazis, or hiding from them and hoping to stay hidden, and you can see the fear (fear unlike anything most of us have ever felt, I'll wager) on the characters' faces. This isn't a book that you read because it's fun; it's a book you read because it shows you the truth of a time so often forgotten or reduced to sentences in history books. Reading about innocent children being taken to concentration camps is very different from seeing innocent children being taken to concentration camps.

And yet, Palacio does an excellent job of keeping the cruelty and pain in this book to a level manageable for MG readers and up, in large part thanks to the themes of hope and kindness that form the core of this book. Sara is a bystander (just like those in Wonder) who did nothing as a physically different kid (in this case Julien) was bullied. Julien has no reason to be kind to Sara in her time of need, but he is, and his kindness changes Sara's outlook on life. Sara's strength as she spends over a year in hiding without her parents is immense; she always strives to remain hopeful, with the white bird on the cover serving as a symbol of hope throughout the story (interestingly, just like birds do in Emily Dickinson's famous poem). White Bird is definitely a reminder that children are some of the strongest, kindest people around, even as adults do some of the worst things humanly possible.

I have two more things to say about this book. First, Palacio's beautiful, detailed illustrations in White Bird are realistic and have a distinctly 1930s/1940s style, helping to transport readers into another time. Second, I really admired how Palacio tied the events of World War II back to today. After Sara is done telling the story to her grandson, an epilogue follows that points out some of the ways in which we have not learned from World War II. Sara looks at a newspaper in the present day that mentions President Trump's child separation policy (an event that is starkly similar to the Holocaust, if on a much-smaller scale). Many authors of books preach tolerance in a vague sort of way, as if there is some kind of abstract force telling people to be intolerant of others. While I sincerely believe any books that preach tolerance are amazing and important, I was impressed by Palacio's willingness to point out specific atrocities even at the risk of alienating readers (she uses Trump's name in the book, something bizarrely few books actually do). Regardless of people's feelings about much of what Trump has done, the fact remains that he implemented the child separation policy, and we let him, just as we let the Holocaust happen around 80 years ago, and I appreciated that Palacio was unafraid to bring this fact to readers' attention.

I can completely understand if White Bird is not the sort of book you want to read while you're stressed out about a pandemic—I basically ignored all of my own advice from my list of books to read right now, and I'll be ignoring that advice again in another review that is coming soon. Once this pandemic ends, though, White Bird needs to be at the top of your reading list. Even if you know all of the facts of World War II, you don't know any of the emotions, and seeing them depicted so unflinchingly in this book is something everyone needs in order to be informed. If our votes put the lives of children like Sara in our hands, we need to know just what we have the power to inflict or not inflict on these kids. Everyone needs to read this book—period.
Update (1/2/2021): My rating is: Really good!