Happy October! For #IMWAYR, I am recommending On the Come Up by Angie Thomas.

A word of caution to any young readers: this is a YA (young adult) book, not an MG (middle grade) book, and it contains somewhat mature content. 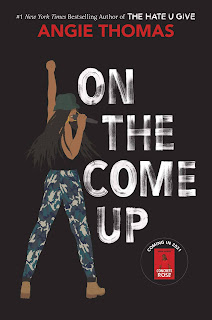 You probably know Angie Thomas as the author of the incomparable, show-stopping book The Hate U Give, which I reviewed just a few months ago. On the Come Up is Thomas's newer novel from 2019, and it is just as absolutely amazing! On the Come Up follows Brianna, or Bri for short, a high school girl dealing with quite a bit. Racist security guards are "protecting" her school, the Garden Heights neighborhood she lives in is reeling from the death of an unnamed boy at the hands of police (presumably Khalil from The Hate U Give, the only indication that these books take place in the same universe), and, despite her mother Jay and older brother Trey both working, they still can't make enough money to keep all the bills paid or make sure food is in the fridge. Bri's goal for life is to become a rapper, just like her deceased father Lawless, and after she has a noteworthy battle at the Ring (where freestyle rappers compete), she decides to release a song online both to release all of the pent-up frustration at the racism surrounding her and to have a shot of getting a record deal and saving her family from poverty. But people read things the way they want to, and it seems like everyone has their own opinion on Bri's song (none of which are the one she wants). And with more and more in her life falling apart, it becomes harder and harder for Bri to stay on the come up.

I cannot possibly capture everything that is wonderful about this book, but I'm sure going to try! First of all, I can't talk about this book without talking about what it has to say about race. You see, the song that Bri releases has this main point: if White people are going to box her and other Black people into a stereotype of violence and dangerousness, then she might as well take advantage of it, let her anger out, and use it against her enemies. (At this point, it's important to remember that Bri is not some "angry Black girl" stereotype; she is a person fed up with living in fear and watching herself and those she loves fall victim to racism and violence. If you were her, you'd be angry too.) When Bri releases her song, though, people don't understand the nuances of it. Many people, Black and White, interpret it as a call for violence and gang culture, others think that it shows Bri falling into a stereotype, and still others wonder if she, as a woman, even wrote it herself. On the Come Up encapsulates the countless ridiculous and harmful ways we scrutinize every word Black people say, contorting them to fit our "needs," and it's really impressive to see all this detail captured in just one novel.

One of Angie Thomas's infinite talents is her ability to balance her characters and settings not becoming stereotypes of Black characters and settings with ensuring that the pain and problems that occur in these places as results of systemic racism (some of which do line up with stereotypes) do not go unnoticed. Bri's family is poor, her mother has overcome an addiction to drugs, and her father died from the same gang violence that her beloved Aunt Pooh continues to be involved in—and you better believe that all of these facets get explored deeply and thoughtfully throughout the pages of this book. But Bri is not a walking stereotype. Bri is a rapper, writing impactful lyrics to try and make a point. She loves Star Wars and plays Mario Kart with her best friends, Sonny and Malik. She works hard to fulfill her passions and help her family. She is a person, with nuances like any other. On the Come Up's balance of stereotypical truths and unstereotypical truths is something that really sets it apart from other books.

Angie Thomas is a Black author, and there's not too many of those out in the world. But reducing her to that label sidelines an important detail: she is a great author. Among people of any race, she is one of the most talented authors you'll ever see. Thomas weaves countless themes and ideas, plots and subplots, and developments for all characters into a cohesive whole. Every word of her writing is impactful, and many parts are just plain hilarious. One part of the book in particular that stands out is when Bri, at a rap battle in the Ring, thinks up lyrics on the spot, and besides getting to hear those delightfully-genius lyrics (full of hard truths and iconic insults), we get to see Bri, stream-of-consciousness-style, come up with the lyrics, connecting one word to the next to come up with excellent rhymes and meanings. Thomas was a teen rapper herself, so she has some experience with writing such lyrics, but even so, seeing Thomas capture the actual way in which Bri writes, the actual individual thoughts that go into rapping, is stunning. I don't think any author could have done what Thomas did in those scenes.

Last thoughts: it's always nice to see LGBTQIA+ representation, and with Bri's friend Sonny being gay and her Aunt Pooh dating a woman, this book delivers on that front even as it delivers on every other front in existence! I mentioned earlier that Bri's mother Jay has recovered from drug addiction, and we get to see the ways in which Jay's addiction hurt Bri as a child and made it hard for her to trust that her mother would be there for her in the future. Aunt Pooh is another fascinating character, a character who shows that, sometimes, people can't or won't change themselves in the way that they need to, that we need them to. Finally, considering how many people are impoverished, very few books actually talk about poverty, so the fact that this book depicts how Bri's family struggles with and is demeaned by poverty is both striking and important.

On the Come Up doesn't just live up to The Hate U Give's legacy, it charts its own unique path filled with important themes and wisdom, characters you'll root for, and stunning writing. On the Come Up is a book that tackles race better than practically any other book, but it's also just a stunning piece of writing that YA authors should look to as a guide for their own books. Whether or not you've read The Hate U Give, read On the Come Up and experience for yourself exactly why Angie Thomas has become such a prominent voice in YA literature!

(P.S. More Angie Thomas excitement: a prequel to The Hate U Give, called Concrete Rose, is coming out in January! Hooray!)