Before we get started, I would like to remind everyone that today (if you're reading this on Monday) is the last day to enter in my giveaway of 3 copies of a truly stunning new book, The Magic Fish by Trung Le Nguyen! Click here to read my review and enter.

For #IMWAYR, I am recommending the graphic memoir The Fire Never Goes Out by Noelle Stevenson.

(I feel compelled to point out that, as I wrote this review, I found myself yelling at the computer because I couldn't find the typing cursor, so... Please appreciate the sacrifices I make for you all.)

In place of my usual YA disclaimer, I must say that this book isn't precisely a young adult (YA) book, as it mostly chronicles Stevenson's twenties, but I'm calling it a YA book because it's published by Harper Teen and would likely be of interest to YA readers thinking about/panicking about their futures. FYI, this book is too focused on adult life for it to be of interest to MG readers, and there is a short depiction of self-harm that is not really discussed adequately and some drawings of naked women used to make a point about body image that some people (though not me) might find objectionable for MG readers. 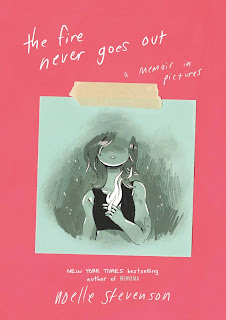 (Update on July 3, 2022: I have updated this post in keeping with ND Stevenson's preferred name and preferred pronouns, which are he/him. However, he wrote this memoir before transitioning, so the content of the book itself may not match what is in the review and what is correct.)

Before we go any further, I should explain how I found out about this book, and why I cared about it far more than many of you likely will. If you've been minutely following every detail on this blog (and I don't imagine you have), you might have noticed that I am a fan of a few cartoon TV shows (like Steven Universe and Infinity Train). Well, there's another one I am a fan of: She-Ra and the Princesses of Power (the 2017 reboot on Netflix, not the 1980s show—I wouldn't touch the original show with a 10-foot pole). And who was the showrunner for the reboot? ND Stevenson. (Fun fact: I went to the virtual Comic-Con panel where I discovered The Magic Fish and Laura Dean Keeps Breaking Up with Me mainly because Stevenson was speaking on it.) Now, although you might not now Stevenson from that role, there is a chance you know him for his MG graphic novel Nimona (which I haven't read), or for his work on the comics series Lumberjanes (which my sibling is obsessed with, but which I haven't read either). In just the last few years, he has become a force in the comics/animation world. This book, The Fire Never Goes Out, is his memoir. Through a montage of comics and blog posts drawn/written from 2011 to 2019, Stevenson depicts what it's like behind the scenes to have accomplished so much, so young (he's only 28), as he dealt with the world's rapidly rising expectations of him, his realization at the time of being a lesbian, and issues with mental health and burnout.

So. Let me say a few things. First of all, I have to point out that, as explained above, I have a much more vested interest in this book than you probably do. And honestly, I think I have a much more vested interest in graphic novels and animation in general than you probably do. I review a lot more graphic novels than a lot of the bloggers I read (as evidenced here), and I'm obsessed enough with animated TV shows that reading this book is the second time I've absorbed the entire backstory of a creator of an animated TV show. Comics and animation are an entire world that I enjoy wading into from time to time (ironic, since I have virtually no drawing skills). But if it's a world you typically don't enter except through its connection to the book world, you might find yourself feeling a bit out of place while reading this book—ND Stevenson isn't one of those Raina Telgemeier or Terri Libenson sorts that are basically MG authors that just happen to have fabulous art skills. If you've read all that, understand the "risks," and feel compelled to wade into this strange and unfamiliar world, then read on...

The Fire Never Goes Out is a very unusual book. Stevenson essentially took many short comics and doodles he drew from 2011 to 2019, as well as blog posts (#bloggersunite #notarealhashtag) he wrote every year to chronicle what he years were like (or at least what he wanted people to perceive his years were like), and combined them all into this book after the fact. Because of the scrapbook-esque nature of this book, there's no plot, there's not really any characters besides Stevenson himself, and there aren't really any other elements you might think of as book-like. The sparseness of plot makes for a somewhat strange reading experience, but it allows the emotions of Stevenson's story to take center stage. From our view, authors and creators seem like they are always on an upward path; they get their big break, and suddenly everything's going well. However (as I'm sure you all know), it of course isn't that simple. Authors and creators are people too, with their own struggles; they just don't usually reveal those struggles to the world. ND Stevenson does. We see Stevenson's journey in his late teens and early twenties as he goes from being a religious teenager who believes he is straight to a non-religious adult who is neither of those things. We see that behind his super-fast success were mental health struggles leading to a never-ceasing drive to keep working, faster and faster, harder and harder, never making a mistake for fear of the whole world crashing down, sending him flying toward burnout and even self-harm. We see his feeling like his mental illness is essential to his creativity and success and, without it, he wouldn't be himself anymore. We see him navigating the messy world of romance and getting swept away into a relationship he didn't expect or quite know how to accept. With his spare drawing style, witty captions, numerous visual metaphors (like the never-ceasing fire threatening to burn him to bits), and additional thoughts on everything from body image and clothes to art school and being called by the wrong name at his graduation, Stevenson conveys the experiences and emotions of his early adult life deftly. The fact that his drawings are from the actual period of his life he is chronicling allows readers a glimpse of reality, not sugar-coated or rose-tinted, that could only exist with a true story but that those featured in the true story would usually be hesitant to disclose.

With The Fire Never Goes Out, ND Stevenson does something few creators do: he makes himself vulnerable. He dares to let people see the actual messiness of his adult life, the highs and the lows inextricably linked together, the mistakes he made and the nightmares he encountered. And, by being vulnerable, he tells a story people need to hear. As a person facing the impending question mark of adult life, I have had basically no idea what to expect. Everyone around me seems to either have already figured everything out or to have fallen so far into disaster that they can't get back out again. But Stevenson tells a different story, a story of real life's pain and angst as it leads toward understanding and hope. He lets people see that figuring-things-out process that is so rarely talked about (so rarely that I didn't even know it was a question I needed an answer to). The Fire Never Goes Out is a book I needed, and it is a book teens and young adults need as well. I hope you will pick up a copy of this book, with all of its own uniqueness, flaws, and charm, so you can see what it truly means to tell a story people can relate to and learn from. I don't think you'll be disappointed.