May 09, 2021
Is anybody else having the urge to read every single book you own and have read, own and haven't read, or don't own at all? It is seriously driving me crazy, especially since, until the end of this week, I barely have time to read at all! But I do have a review for today, which I am writing at the very last minute, so it will probably be shorter than usual. Today, I'm looking at Concrete Rose by Angie Thomas.
A word of caution to any young readers: this is a YA (young adult) book, not an MG (middle grade) book, and it contains somewhat mature content. 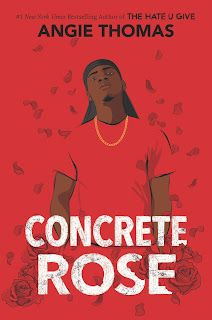