Thursday Thoughts: Don't judge a book by its cover...right?

During most of the year, it's hard enough to get a single book review up on this blog each week. But during the summer, I have loads more time that I can spend working on this blog, and so...I'll be posting twice a week! 🎊🥳🎉 Besides my usual book reviews on Mondays (which will always be my top priority if I am short on time), I'm trying a new format that I call Thursday Thoughts! Basically, I'll just be talking/ranting about a book-related topic that interests me each Thursday (or at least some Thursdays—let's not bite off more than we can chew, shall we?). With that...let's dive right in!

I've always been guilty of ignoring said advice. I had a bad habit in the past of buying books with pretty cover illustrations that always ended up being the dead-parent MG books that I generally find irritating.

But here's the thing: I'm not actually that sure that judging a book by its cover is so bad.

I know, I know—that was practically sacrilege to say out loud. But I believe it. And I'll explain why.

First of all, I think it's no secret that finding good books is difficult. Really difficult. As in we've-all-devoted-basically-one-day-of-the-week-to-searching-a-bunch-of-blogs-on-the-Internet-just-to-find-books difficult.

There's online book recommendation systems, like those built into Goodreads, or Storygraph, or the websites of online bookstores—but the ones I've used have zero nuance in their suggestions. (And, anyway, they suggest so much that you still have to sort through it!)

There's your favorite bookstore employee or librarian—except that the employees at Barnes & Noble have mediocre recommendations, there aren't any independent bookstores near me except hyper-specialized ones, and I've never actually thought about talking to a librarian until I wrote this post (and I'm using that as supporting evidence even though it actually isn't).

There's friends and family members—but they can only be of use if they read similar things, and such a connection tends to be very rare!

So finding books is really hard unless you devote one-seventh of your week to participating in online blogging groups (which is also hard—it's just so fun, at least for me, that I keep doing it). When the other options are that time-consuming and often-fruitless, it's pretty difficult to resist the allure of judging by covers.

But, frankly, I'm really not sure what is so awful about judging a book by its cover in the first place. It may not have always been this way—there's some old-fashioned book covers that look so drab, I'm surprised any of those books ever sold—but I tend to find that, at least nowadays, book covers today are actually pretty representative of the stories themselves. And I don't know why that's surprising—cover artists are literally paid to represent the book as an illustration, so why wouldn't they do a good job? And with books like graphic novels, it's often the author themselves illustrating the cover in the first place!

I think the real key here is not to just buy books with covers that look pretty, like I used to make the mistake of doing, but to actually look just a little more closely and notice the actual details on the cover that illustrate what the story is like. As I'll demonstrate in the examples that follow, those details are both frequent and pretty easy to spot! 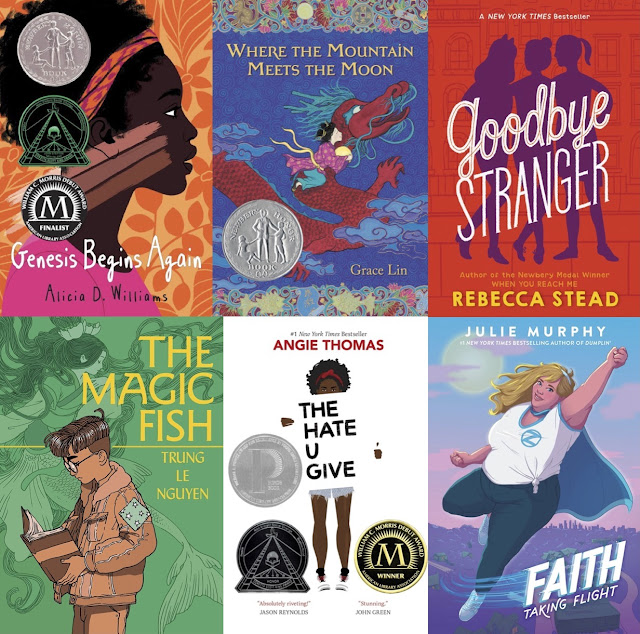 Here's a montage of covers of books I've reviewed and loved. We'll go through them left to right, first row and then second row.

See my point? Maybe buying books just because the cover is pretty is a bad way to go about things, but searching the covers for meaningful details, whether overt or implicit, is likely a way better strategy than reading every flap description or every review in existence.
So stop getting so mad at everyone for judging books by their covers! As I hope I've made clear, it might actually be the best way of all to find books you'll love.
Any times you've bought a book based on its cover and loved or hated it? Let me know in the comments below—I'd love to hear from you! I'll see you on Monday for another book review, and a week from today for another round of Thursday Thoughts!
✨✨ Labels: Thursday Thoughts